Rob Wittig, since composing this response, has been serving as the "street barker" who announces the appearance of new ebr content.

My delay in contributing my $00.02 to the ongoing ruminations about the ebr interface has not been for lack of interest and enthusiasm. Just time.

Some great ideas in circulation!

Here are some thoughts.

1} -- I love the vision of every piece of ebr being visible at the same time, and then zooming in to get details.

2} -- Also love the vision of the relationships between clusters of designwriting being variable, and visible according to different organizational rubrics: theme, language group, discourse style, real world geography, "Joe's Favorites," "Users' Favorites." Many different ways to view the Table of Contents, or Field of Contents. Different views for different uses, different moods.

3} -- Many programmers have made it a Holy Grail to devise a nest of algorithms to...automatically...link new pieces of designwriting together in a meaningful way. The results are sometimes interesting, but most often dull. My counsel: try that, if it interests you, but don't leave ALL the linking functions to the machine. Have machine-linked views AND Human-DJ-Linked views. It's a perfect place for human hands on the keyboard. Like on a synthesizer/sampler keyboard. Play the links like a musical instrument. Joe's personal Re-Mix. Joe's Academic Re-Mix. Anne's textile Re-Mix. Guest Re-Mixes. Mix-It Yourself. People are great at making connections. Playful and unpredictable. Brains are built for playing with connections.

4} -- Illustratory analogy of the above. I think Plumbdesign's "Visual Thesaurus" on line is a crappy thesaurus, a crappy reference tool. It is a fabulously beautiful verbal/musical instrument. At the recent telepoetics link-up at the Electronic Literature Organization's "GIG", I played the thesaurus as an instrument behind my reading with Kurt Heintz. I definitely want to play it live as a light show for a dance party sometime.

Music engineers in the 60s worked night and day to make electronic imitations of acoustical instruments and get rid of the awful "machine-y noises." Turns out there's a whole esthetic now around those very "machine-y noises." That's the way the partnership between art and engineering works: "Oops, sorry." "No, it's beautiful, we love it!"

5} -- I'm thinking back to the historical roots of literary journals as I understand them 17th 18th 19th c. May be some helpful things there. So that there can be an answer to the important question (the one few people ask): "What is the purpose of ebr?"

My sense is that one description is the following. If you're a rich, literate European, you find out "what's going on" in the culture through word of mouth...IF you are in The City.

But what if you're out at your country place?

How do you keep track of what people are talking about?

Well...you get your friends to write you letters. One of my favorite literary forms is the "News Letter" Diderot wrote. It was hand-copied, had a circulation of about 8 subscribers (including Catherine the Great, Empress of All the Russias) and basically was a smart, cool guy's guide to what was happening in Paris. He got paid big bucks for it, too. Diderot's News Letter is sometimes claimed as the origin of art criticism as we know it. "Went to the painting show, and here's what I saw...this sucked, that was great"

So, if enough people are out at their country places, wanting to know what's going on, it starts to make tactical and financial sense to pay to have the news letter printed, to have multiple writers collaborate on it, to have it on sale at the home-base printer/bookseller's store, and to send it to the countryside.

Anyway, it's an interesting question: is the fundamental gesture, the purpose, of ebr something like: "We have formed a City --- international, selective, elective --- where cool people gather and share; do you want to see the results of that activity? Do you want a News Letter from our city so that you have a better sense of What's Going On?"

Or is it more: "You're a reader, but you need some advice about what to read next. Boy, do we have some suggestions for you!! Get your hands on this, avoid that!"

Knowing what that fundamental purpose is could go a long way to helping know what choices to make in the interface. How do you invite someone to your City News Letter visually? How do you assist an avid reader visually?

6} -- The Quarterly Issue format, organized around printing costs and printing schedules, has a number of things that travel in its wake...some of them unnoticed.

One of these is that the publication moment is also a publicity moment. "(trumpet call) Hear ye, hear ye. We've got a new issue ready, a bunch of new stuff, come and check it out."

People are used to a certain amount of hoopla surrounding New Issues of Periodicals, so the publicity doesn't feel intrusive and trashy to us. But that's only because we're used to it.

If ebr goes off the quarterly system, then a separate study needs to be made of publicity moments.

I think the publicity moment is one of the chief problems for Electronic Literature anyway, so it's worth some thought.

a) the idea of Spam e-mail as an art form...something so lovely and clever that it would be welcomed by most recipients.

b) the idea of Publicity Stunt as an art form...a chat with a guest chatter, a reading, a performance...ephemeral, conceptually time-sensitive electronic work that is only "up" for a short period

One principle: to do new kinds of publicity might feel awkward and trashy for us...somehow we genteel folk should be above Publicity Stunts. I don't buy it. We're just back to a wide open, rootin' tootin', handbills-and-street-vendors world like the 18th century.

. “A Place For Human Hands On the Keyboard”, Electronic Book Review, November 18, 2001, .
Readers wishing to respond to an essay in ebr may send ripostes or short glosses to the journal’s Managing Editor, Will Luers.
PDF 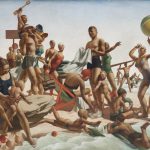