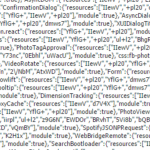 A riPOSTe to: Electronic Literature Translation: Translation as Process, Experience and Mediation

In response to Mencia, Pold, and Portela, Belgian poet and scholar Jan Baetans suggests that we might view the field of trans-medial literature as an offshoot of translation studies (and not the reverse). In any case, whether we approach e-lit from a medial or linguistic standpoint, scholars do well to observe a "merger of translation and adaptation studies."

Translation and translation issues are among the most fundamental issues in any writing practice or theory and no writer can avoid addressing them. Countless theories and methods have given birth to no less countless ideas and speculations, best and worst practices, illuminatingly simple and deceivingly complex outcomes, as well as dead ends and springboards to the endless process of rereading and rewriting texts in and between all kinds of languages –and more and more also between all kinds of media, for it is now generally accepted that the whole field of adaptation also belongs to the larger field of translation (and not the other way around). Yet most of these debates still have certain implicit starting points that the text by Mencía, Pold and Portela rightly challenge. Obviously, these issues have to do no longer with "fidelity" (of the target text to the source text) or the restriction of the translation process to merely linguistic aspects (as if images did not raise any translation problem, for example). They touch instead on topics such as the exclusion of certain aspects of the text's mediality and materiality, which are not seen as part of the translation problem, and, more generally, the cultural and historical dimension of this mediality and materiality. When the text under scrutiny is an electronic text - that is, a textual production that cannot be separated from a certain number of text-programming constraints at the level of both software and hardware - it becomes clear that we can no longer ignore this complexity, which is not only that of digital texts, but of any text whatsoever. The essay by Mencía, Pold and Portela is then a crucial contribution to a new theory and practice of translation, one that's capable of taking into account a broader set of aspects and criteria that force us to reshape our very thinking of what translation is.

Thus seen, the article looks to be as ground-breaking as the writings on translation by Roman Jakobson in the 1960s, which made room for questions such as intralinguistic translation (inside one language, thus drawing our attention to issues such as obsolescence of texts and their problematic encounter with permanently shifting social groups) or intermedial translation (which would break ground for the merger of translation and adaptation studies). Among the many important openings made by Mencía, Pold and Portela, I would like to foreground three.

First of all, the proposal to include the technological dimensions of the text in the global translation process. When translating an electronic text, one is also confronted with the problems of translating the various algorithms and medial infrastructures that not only allow readers to discover the text, but that actually help create it. Mencía, Pold and Portela's argument is of course directly linked with software and hardware questions, but it is easy to see that the authors make something more than an implicit plea for an extension of this point to all texts. They stress for instance the fact that electronic writing is one of the possible continuations of the age-old tradition of permutational writing, one of the key strands of constrained writing, just as they usefully remind us of the material complexity of non-electronic forms of reading and writing. Thanks to this article, it becomes possible for example to rethink something like that very specific way of translating that is interpretation, which should be seen as much more than the more or less correct repetition in another language of an orally produced speech or conversation. Interpretation cannot be separated from the materiality of the medium – in this case the body of both speaker(s) and interpreter(s) – and the framing of this materiality is highly culture-sensitive (gender and age issues are key, just like issues of proxemics, fashion, and sound technology).

Second, the authors convincingly elaborate on the intertwining of four dimensions in the translating process: translinguistic, transcoded, transmedial, and transcreational. Although I agree with the necessity of bringing together language, code and medium (after all, this is a continuation of the all-inclusive approach sketched above), I don't know whether the transcreational dimension has the same status as the three other aspects. My reservations here are twofold. On the one hand, transcreation has become a kind of buzz word, which may lack the sharp focus that is needed to make sense of translinguistic, transcoding or transmedial operations. On the other hand, the term may be at odds with a vital aspect of digital writing, namely procedurality and programmability. By this, of course I do not want to suggest that procedural writing and translating are not creative or transcreative. We all know the tremendous amount of creativity that is needed to set up a procedural text and we equally know that the implementation of such a text is often the source of immensely innovative and unforeseen outcomes. What I mean is this: if transcreation can be seen as a liberation of the crippling axioms on the fidelity and transparency of the target text, there is also a danger that a transcreation approach of the material and medial aspects of the digital text may actually involve a reduction of the text's proceduralism and thus a decrease of its medial and material complexity. Transcreationalism, in other words, runs the risk that enabling the translator to skip or overlook certain difficulties having to do with software and hardware constraints, which the essay by Mencía, Pold and Portela ask us to take as seriously as those of the verbal or visual surface of the text. Perhaps it is useful to mention here that certain forms of transcreational writing are strongly relying upon constrained writing themselves, such as for instance the "homophonic" translations; which is to say: translations which reproduce in the target text the sounds of the source text, regardless of the initial meaning and recreating a totally new one (the classic example is the French translation by François Le Lionnais of John Keats "A thing of beauty is a joy for ever": Un singe débotté est une joie pour l'hiver See: http://oulipo.net/fr/contraintes/traduction-homophonique. The French sentence means both "a monkey with no boot is a joy for winter days" and "an add-libbing monkey is a joy for winter days."

Third, the shift from product to process, which radically reframes translation as translating: i.e., as a culturally and historically situated practice that remains endlessly open to change and reinvention. This move may seem quite self-evident for digital writing, where closure is not part of the usual mind frame of textual agents. Yet as the authors strongly emphasize, networked procedurality is not to be seen as the exclusive domain or privilege of digital writing. Nondigital writing is no less concerned by it, which opens many new perspectives for textual analysis in general. Moreover, procedurality should not be reduced to purely technical matters, but can be read in cultural and historical terms (to offer a text on a touch screen display is different from offering the "same" text via a keyboard interface). The most challenging proposal of Mencía, Pold and Portela is however the proposal to merge both perspectives – that is: the cultural reading of electronic materiality on the one hand and the disclosure of the medial and material layers of translation on the other hand – and to invite us to critically read the models "that have automated natural language processing as a general condition for digital communication". The multilayered and multidimensional approach to translation, with the four "trans-" explained at the beginning of their essay, produces here, just before the conclusion of the text, a dramatically challenging and important opening of a form of constraint that often remains unnoticed since it seems so perfectly natural.

Baetens, Jan. “Creating New Constraints: Toward a Theory of Writing as Digital Translation”, Electronic Book Review, July 1, 2018, .
Readers wishing to respond to an essay in ebr may send ripostes or short glosses to the journal’s Managing Editor, Will Luers.
PDF
This essay was peer-reviewed. 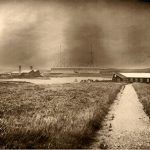 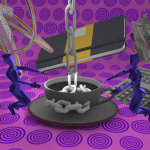