Geoffrey Winthrop-Young takes the outside perspective on German media studies.

Of the eight papers - including the introduction by the editors - that make up this special on "German Media Studies," no less than six deal with German television. At first glance this does not bode well, since it threatens that readers will be transported back to the dark age of media studies when "media" were seen exclusively in terms of mass media; mass media, in turn, were conflated with television; and television, to top it off, was routinely denounced as the prime instrument of a culture industry bent on deluding, homogenizing, and Americanizing cultures that had hitherto enjoyed the lively interaction and emancipatory splendour of spoken words and printed books. To be sure, there are occasional echoes of this Frankfurt School-type regression in some of the contributions, but it is only fair to point out that the TV-fixation of this media special comes with good reason and turns out to be very fruitful.

In their introduction, "After the Bardic Era - German Television since 1984" (3-21), editors Michael Geisler and Michelle Mattson quote a 1981 affirmation by British media critics that "West German broadcasting has a plausible claim to being the most successful instance of public service broadcasting in the world" (3). This is, no doubt, an intellectual's assessment of what has stubbornly refused to be an intellectuals' medium. It is rooted in the perception that ever since its inception in 1948, German television, financed in part by government subsidies, licensing fees, and advertising revenues, was fully committed to public education and information. By providing a full-range, diverse, and balanced range of programming, it evolved into a key player in the process of establishing and stabilizing democratic structures. Thus, television culture appears to guide and form a nation.

As Peter Humphreys points out in his paper "Germany's 'Dual' Broadcasting System: Recipe for Pluralism in the Age of Multi-Channel Broadcasting?" (23-52), TV's committment to public service allowed for a separation of media powers "between a private commercial press that was accountable to the market (and mostly to those with market power) and the public-service broadcasters which were accountable to the citizenry" (24) - a constellation that within the US would, with a more than predictable outcome, pit PBS against Rupert Murdoch. To a degree that is unthinkable in the US (though there are obvious parallels to Canadian media politics), the German supreme constitutional court was called on to define what the privileges and obligations of public service broadcasting are, especially when it was challenged by deregulation in the mid-80s.

Judging by Humphreys's paper as well as by the contribution by Knut Hickethier, "A Cultural Break or Perhaps Things Didn't Go that Far" (53-74), the impact of deregulation was roughly akin to that of a continent-sized asteroid hurtling in from deep space. Humphreys details the "paradigmatic transformation from the traditional public-service monopoly to the dual private/public system" (23) with all its attendant political manoeuvering and financial power plays; while Hickethier shows how this development was exacerbated by the reunification and the attempts to Europeanize the broadcasting system. Both papers are recommended reading, and not only for students of German media politics.

Two papers - Heidemarie Schumacher's "From the True, the Good, the Beautiful to the Truly Beautiful Goods: Audience Identification Strategies on German 'B-Television' Programs" (152-160) and Michelle Mattson's "Tatort: The Generation of Public Identity in a German Crime Series" (161-181) - offer content analyses. Schumacher concentrates on the strategies guiding the advertising and programming of the new commercial channels, and concludes that their mass appeal is due to their adherence to three specific operating principles: "1) grab the viewer's attention; 2) establish an emotional involvement for audience members; and 3) maintain and anchor the viewer's interest" (155). The paper was originally published in 1995, but even then this insight was neither very new nor stimulating. Apart from a noticeable inability to fully grasp the implications of increasingly Americanized program formats, the paper suffers from an ailment common to many German media studies: an infatuation with the strategies of the makers of television at the expense of the audience. The paper focuses on how programs are supposed to be seen, not on how viewers actually see them. Mattson, in turn, offers a stringent, theoretically informed analysis of the very successful German crime series Tatort, with special emphasis on how the series - which is produced by the different regional networks and can thus "grapple with political and social issues of particular relevance to their region" (163) - has in recent years tackled the image of the foreigner in Germany. The paper is a subtle and perceptive addition to the growing interest in the social construction of ethnic and regional minorities in an increasingly multi-cultural Germany.

In terms of audience involvement, Siegfried Zielinsky's paper "Fissures-Dissonances-Questions-Visions" (133-151) goes a considerable step further by discussing the new technological possibilities of the production and distribution of interventionist media products. Zielinsky's analysis is a dialectical tour de force that attempts to update Walter Benjamin in the age of electronic reproduction and simulation. Just as Benjamin sensed the social and political opportunities emerging from the new technologies of reproduction, Zielinsky argues that "technically more advanced productive forces have created new venues for artistic expression" (140). This sounds a lot like recycled old-style media materialism, but it performs a dialectical leap that allows for an escape from the Frankfurt School's culture industry: "With the rise of television the culture industry appropriated the private familial realm, but in so doing created gaps and fallow areas in the public that could be reoccupied" (151). The technologies are there, we just have to learn to fully exploit them. (In other words, Hegel rears his head by way of Benjamin and Georg Simmel: consciousness has yet to come to terms with the objective spirit.)

Zielinsky's contribution is firmly rooted in the playground of German media theory, thus it is of great help to the reader that Michael Geisler's paper, "From Building Blocks to Radical Construction: West German Media Theory since 1984" (75-107), traces the various trajectories and lineages of German media theory from the Frankfurt School and the interventions of Hans Magnus Enzensberger to current media scholars like Friedrich Kittler, Norbert Bolz, and Hartmut Winkler. The paper offers some excellent and very informed summaries, not to mention that it may represent the first informed introduction in English to the work of Bolz and, in particular, Winkler (whose strengths and weaknesses are convincingly detailed). Geisler's account of Kittler, however, is somewhat baffling. To be sure, Kittler can be - and has been - criticized for many things, but to contend that the "secret agenda" of his "gloomy rantings" is the "lament over the displacement of the printed word" is a bit like describing Guns 'n Roses as Gregorian choir boys. To portray Kittler of all people as a morose Gutenbergian - a Sven Birkerts or Neil Postman with an attitude, as it were - is nothing short of preposterous. Geisler's sympathies are clearly with Bolz, whose fusion of Benjamin and McLuhan receives high accolades and is presented as a far more original contribution than, say, Kittler's work.

Bolz is himself represented in the collection with "Farewell to the Gutenberg Galaxy" (109-131), a translation of a chapter of his 1990 study Theorie der neuen Medien (Theory of the New Media): a witty, brilliant, eclectic mix of Benjamin and McLuhan that does indeed corroborate Geisler's positive evaluation. It should be noted, however, that underneath the hip veneer Bolz tends to recycle the old anthropocentric story of media as extensions and prostheses of human brains and bodies. Also, in recent years Bolz, despite the fact that his numerous books are ever more flashy and full of highly quotable sound bites, has mellowed. "Media" is now replaced by the more innocuous "communication" and, moving away from the hardware fraction of Kittler, Bolz increasingly makes (once again, very eclectic) use of Niklas Luhmann's media and communication theory (whose absence is one of the few visible gaps in the collection).

The collection, in short, lives up to its title, not because it provides a comprehensive view of German media theory, but because its eclectic mix, not to mention its juxtaposition of social concerns versus withdrawal into hardware, is itself a very revealing example of how German media theory appears to those who look in from the outside.

. “German TV Troubles”, Electronic Book Review, December 30, 2000, .
Readers wishing to respond to an essay in ebr may send ripostes or short glosses to the journal’s Managing Editor, Will Luers.
PDF

other essays by 222
Geoffrey Winthrop-Young

Blackness and the Migratory Drive 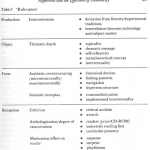