The difference between our Thespis and Stern's Façade lies, in the end, in two questions: whether computational representation of the internal psychic life of characters is feasible, and whether it is useful.

Stern may perhaps be correct in thinking the Façade project feasible, and we wish him well. It is clearly a difficult challenge, but it is not one that Thespis needs to tackle, since we believe dramatists are already rather good at writing plays, and they do not need sophisticated computational systems to do it. Whether Thespis will necessarily produce rich dramatic experiences remains, as Perlin points out, an empirical question. Thespis requires writing, not computational psychology. Moreover, the system does not require extravagant programming. Sculptural hypertext systems like Card Shark and Thespis can be written by a competent undergraduate, while Façade has taken years of Stern and Mateas's considerable talents.

The utility question, interestingly, may boil down to the efficacy of method acting. Many, following Stanislavski, believe it useful for an actor to learn to experience the drama as if he or she were actually participating - that performance benefits from the ability to experience the emotions that the character would experience in the dramatic situation. This is not necessarily true: the gentleman in black is not the Prince of Denmark. In the end, he's paid to play the play; what he feels in the process is his business (and in any case, we cannot know what he's feeling).

The actor does not need to "become" the character. The phrase, in fact, has no meaning. There is no character. There are only lines on a page. They are lines of dialogue meant to be said by the actor. When he or she says them simply, in an attempt to achieve an object more or less like that suggested by the author, the audience sees an illusion of a character on the stage [Mamet 1999].

In "My Friend Hamlet," we argue that letting a sane, sensible character like you or me into the scene collapses the drama's sustaining illusion. It is generous of Stern to call our argument "definitive and devastating." Yes, it has been a dream for some players to be permitted to do anything within the fictive universe. People often dream of things they can't have, and wouldn't want to have if they could [Tolkein, 240]. If the player is a hero, she must by definition struggle against the world model. The boundaries and limitations of the world model become by definition the hero-player's chief concern.

. “Mark Bernstein and Diane Greco respond in turn”, Electronic Book Review, November 7, 2004, .
Readers wishing to respond to an essay in ebr may send ripostes or short glosses to the journal’s Managing Editor, Will Luers.
PDF

other essays by 222
Mark Bernstein 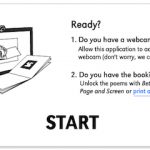 Not a case of words: Textual Environments and Multimateriality in Between Page and Screen