Marie-Laure Ryan describes Juvenate as an audiovisual hypertext that can be navigated via a provided map or wandered through like a maze, evoking the question of whether the text is best understood as a narrative or a game.

An audiovisual hypertext written with Director 7, Juvenate explores the inner life of a dying man haunted by the sounds and images of a world from which he is now physically isolated in his hospital bed. A quote from Charles Dickens on the exit screen weaves together life and death, suggesting that death is part of the fabric of life, but also framing the images of the mental journey of Juvenate as the poignant goodbyes of the dying man to the lifeworld and to those he loves, his son and his wife (or lover): "Life is made of many partings welded together."

A Chinese proverb on both the entrance and exit screens alludes to the mythical theme of the eternal return: "The beginning and the end reach out their hands to each other." The text concretizes this idea through the interleaved themes of childhood and illness, as well as through the recurrent visual motif of touching or reaching hands: the hand of the child on the face of the father; the hand of the woman on the hand of the man; and the hand of the man reaching out for a sunflower seed, which will sprout and blossom in front of barbed wire on the next screen.

"Heavily textured with supersaturated colors," as the authors describe them, the images convey "the intense sensory perception experienced by the terminally ill." Almost painful to contemplate, they refuse to aestheticize the experience of the dying. Some of the pictures can be interpreted as sensory perceptions, others as memories, and still others as dreams, visions, and fantasies. This is not a physical space experienced by a mobile body, but an alternative reality created by a feverish mind - the only space left open for exploration when the body is tied to a hospital bed.

Juvenate takes the user through a network of thirty-seven pictorial screens, each of which corresponds to a separate Director movie. The user navigates through an elegantly simple, natural interface: mousing over the screen until something happens. There is no need to click. For the reader who wants to visit the text systematically, rather than being carried around the inner world of the sick man by the random associations of the mind, a map accessible at any time gives direct access to every screen by clicking on its thumbnail image.

The movements of the cursor animate still pictures, make images emerge from the deep (an effect made possible by the layered structure of Director frames), and activate a variety of intradiegetic and extradiegetic sound effects: children's voices, bird songs, piano music, groans of a man trying to defecate in a hospital bed, and recordings of heartbeat by medical equipment. The juxtaposition of sound and pictures creates meanings that neither of these semiotic channels could convey by itself: for instance, a lawnmower sound threatens the radiant beauty of the sunflower.

The network and the map offer not only two alternative ways to navigate the text, but also two complementary ways to experience it. Some readers will regard the text as a game, and will give themselves a goal, such as visiting all the screens without consulting the map, or finding the way out of the labyrinth. (The exits are two screens that symbolize death.)

Other readers will rely heavily on the map, for instance to visit the sparsely connected screens of happy memories. These readers will travel much more leisurely through the network, taking the time to explore each picture in depth, attending to the musical structures of recurrent motifs that connect the various screens, breaking up the journey into small stages, and overall enjoying exploration more than destination. It is the rare merit of Juvenate to offer both a gamelike and an aesthetic experience, to reward both the goal-driven action of ludus and the free play of paidia.

Ryan, Marie-Laure. “On Juvenate”, Electronic Book Review, March 10, 2008, .
Readers wishing to respond to an essay in ebr may send ripostes or short glosses to the journal’s Managing Editor, Will Luers.
PDF
This essay was peer-reviewed.

A Response to “A New ‘Gospel of the Three Dimensions'” 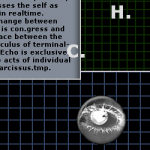