Mike Barrett evaluates Steve Tomasula's The Book of Portraiture in terms of its place between tradition and artistic innovation in the 21st century.

Steve Tomasula's latest book, The Book of Portraiture, published by FC2, continues his project, begun with VAS and IN & OZ, to reshape the novel to accommodate technology, artistic, social, and sexual history. The Book of Portraiture is a cunning reply to the historicity that demands a response. Using the formal innovations of postmodernism with a naturalistic treatment of historical conditions, Tomasula has composed a nearly comprehensive text that shows us the stakes of making art in the 21st Century.

The novel is composed of five chapters that are as much thesis as plot, from the first, which narrates the moment when Thut-Moses "invents" (as in "comes upon") the phonemic alphabet, to the fifth in which an artist/scientist composes art out of the alphabet of DNA. The chapters exhibit, through an array of texts, that consciousness is externalized through mimetic sign systems. These systems organize social order and enforce their terrors, as well as provide for the possibility of a limited revision through artistic innovation.

Tomasula historicizes these signifying systems through evolving narrative discourses. The second chapter, for example, is a document written in the Spanish painter Diego Velasquez's voice chronicling court and esthetic intrigue in 17th century Europe. The third is akin to Freud's Dora: A Case Study in which an early 20th Century psychoanalyst confronts female sexuality that remains inscrutable as his own blindness. The fourth is a complex, panopticonal study of economic, technological, and geopolitical relations.

It's not hard to see Foucault's influence here - excavating power relations by reading how they are constructed in discourse. From the beginning of the novel, the attempt to rewrite power is subject to Discipline and Punish, "He had witnessed a hand being cut from each of two farmers who had tried to forge a clay tablet that bore their debt" (9). In the Velasquez chapter, the Inquisition enforces a theology, through torture and execution, that keeps the social and artistic order in place:

What do your illusions of light and color say about the nature of the world? Or our ability to know it? What are you telling us with your unresolved spaces when other artists order the haphazard world of appearance into the harmonious world of art by a use of linear perspective? Is or is not life nothing but movement or is nature sufficiently well order'd to prove the existence of God? (77).

The Inquisition's concern over Velasquez's composition of space is keen because they recognize, as Tomasula does, that when we re-vision, we revise culture.

The third chapter, "P Displays R If and Only If S (a modern romance)" is intertextual with early 20th century psychological discourses, as well as a reading of those discourses ala Foucault's Civilization and Madness and History of Sexuality. Using found material like advertisements ("THE BELBOUT ELECTRIC-POWERED VIBRO-WAND"), medical journal articles ("Disguised Onanism, (Masked Masturbation)" American Journal of Urology and Sexology), as well as a fictionalized case study (-Yes! Yes! Oh Doctor Yesssssss! (And ectecteras. Monotonously so, eceteras)) Tomasula humorously displays how sexual identity is subjectively constructed by self-described objective disciplines. Contiguous with the humor are the sober strains of imperialism, World War I, and eugenics.

The characters in The Book of Portraiture are composed as historical subjects. In other words, characterization is as much a result of the archeology of knowledge as it is the novelist's unifying vision. Tomasula not only uses Foucault to analyze discourses in uncovering the networks of social power, he uses Foucault synthetically - as a mode of narrative invention. This is one of the most important legacies of Foucault's work - it is, as I have argued elsewhere, a tropebook. Foucault is a rhetorician who gathers not literary figures, but social figures constructed in institutional discourse; Foucault's texts are commonplace books of social relations. Take a Foucault trope, drop it on a topos, and you have New Historicism. When Tomasula drops it on contemporary American society in chapter five, we see a vastly complex, technologically driven society in which social relations, and identities, are recorded, accounted, and traced as commerce:

in an age of interlocking subdivisions and identical restaurants, in a world that generated 100,000,000 Miracle Slacks™, each of which had to be filled - HELLO! MY NAME IS ______ - in a country of actuary tables, of zip codes, of an endless supply of service manager uniforms (filled out by Service Managers), census forms (filled in by Citizens), personalized mail-order catalogs, identical parking garages and their tiers of look alike vans (Forest Green or Goldenrod) bearing vanity plates (2HOT4U) stamped out by some 51 prisons (a form of living to be sure), of Neilson ratings, and Frequent Flier membership... (152)

The plot grows from the interstices in this charter'd world.

At the border of the interstices lies the threat and realization of violence, which is a motif in The Book of Portraiture. Once discourses are produced, it takes material enforcement for them to secure social relations. Characters in the novel take their place in this order but operate under the threat of enforcement if they deviate - Velasquez in court, under the watchful of the Inquisition, P in her father's house, Q in the Army, I in the FBI, and all the characters who are incarnated in the incorporation. Tomasula shows that technology operates to multiply markets and enforce the economic order:

Monitor #5 showed Q__ get out of her car in the employee parking lot. Monitor #4 showed her walk across the lot. Monitor #3 showed her enter the lobby where the Receptionist was watching rows of banked monitors... Run off the road yeah, right, Receptionist thought, watching Q__ appear on Monitor #2, the monitor that showed the stretch of hallway in front of the elevator bank. Monitor #1 showed their Boss, inside one of the elevators, unbunching his crotch. (205)

The individual is forever caught in the market's economy or the machine's circuitry. This world Tomasula renders, though, is not entirely dystopic. Technological innovation develops in the novel from characters with agency, albeit limited agency. In the first chapter, it is the storyteller's desire that leads to the alphabet; it is Velasquez's desire to a paint a painting in which the audience views viewing and painting simultaneously that leads him to create "Las Meninas"; the performance artist and scientist, Mary's desire in the last chapter is to create a genetic fingerprint that includes the DNA of its parents and a possible third, Christ, for example. Innovation continues the work of evolution, Tomasula seems to assert, and is as much the work, and responsibility, of the artist as it is the scientist. The Book of Portraiture itself is a stirring example.

Though innovation grows in a field of agency, it is quickly appropriated. In the fifth chapter, a satellite broadcasts Mary's show, "In a Beginning," - this same technology steers bombs to their destination in the Middle East. The lab where Mary (the scientist/artist) works is called to help in identifying DNA of those killed in the wake of 9/11. Bombs explode in all directions.

The Book of Portraiture is an experimental text where content, historical reference, matter. After the fall of the Soviet bloc, Islam has emerged as the most potent resistance discourse to the hegemony of late-capitalism. Tomasula portrays this dialectic in the novel. In the fourth chapter we are given the character Q, ex-army, suffering from post-traumatic stress syndrome after being grievously injured in a martyrdom operation. At the center of that operation is a young girl who walks into the middle of the road to slow the Humvee in which Q drives; the Humvee is then attacked. In the fifth chapter, the story of Mary is juxtaposed to the story of that young girl in the middle of the road, Fatima, in Lebanon, through the perspective of her father. The fate of these two ways of seeing, of being, West and Middle East, are woven with the same narrative threads, a reminder of our current historical condition.

The novel's approach to innovation - formal innovation that retains historical reference - is certainly a response our time. It is not as if Americans woke to history on 9/11. We were always already historicized, the novel reminds us. As such, the novel owes as much to naturalism as it does to postmodernism. More provisional than a mirror held up to reality, the novel gives us more apt metaphors: a stick making figures in the sand guided by history and consciousness. Or pigment on canvas. Or 0s and 1s compiled by a compiler, turning on and off switches in silicon. Or amino acids, isolated and manipulated, then suspended in a test tube. The Book of Portraiture continues the novelistic tradition while transforming it. It could be the subject of the latest chapter in Auerbach's Mimesis.

Another of the novel's accomplishments is to provide a "philology" of the visual. The design of the book emphasizes this. Major plot complications are preceded by visualizing - texts in the sand, Velasquez's "Las Meninas," a spinster's dream, surveillance tape, the label on a container of frozen sperm. Social order emerges out of visual order and then evolves through revision. The Book of Portraiture is itself an ambitious portrait of 21st Century America. More than postmodern, more than naturalistic, Tomasula has composed a visionary novel.

. “Seeing the novel in the 21st Century”, Electronic Book Review, October 1, 2007, .
Readers wishing to respond to an essay in ebr may send ripostes or short glosses to the journal’s Managing Editor, Will Luers.
PDF 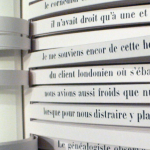 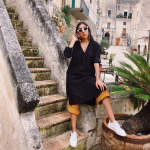 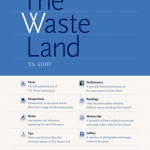 Against Information: Reading (in) the Electronic Waste Land