Linda Carolli on the third hybrid collection by Michael Joyce, a work (like the technological landscape it's about) at once industrial and informatic, essayistic and narrative, technical and autobiographical.

It's taken me a long time to read this book, not because Joyce is an arduous read, and definitely not because this is a hefty tome. It's because my attention can be quite nomadic, easily distracted into other, more pressing concerns of the day. I started reading Joyce's Moral Tales and Meditations: Technological Parables and Refractions while working in Mt Isa for a few days, a mining town in western Queensland's ruddy hued desert. Mt Isa's technological scape is impressive with the scaffold and steel, smoke stacks and sulphur of the mine complex dominating the flat town's gentle sprawl of suburbs. The technosphere of this place is at once industrial and informatic. It was hot as I lay in a motel room, watching cable television, endless video shows, and cartoons. Run by an Aboriginal media organisation, Imparja Television broadcasts throughout central Australia, a local voice in an electronic tide of programming from Southern capital cities and America. Sweating in that motel room because it's the middle of summer and the air conditioner doesn't work, my attention drifts from Joyce's book to television channel surfing to the work beckoning from the radiant laptop screen. In this context, Joyce's short texts resonate, emphasising technological subtleties in our everyday lives. Either that, or I have been transported into a David Lynch or Oliver Stone film, where I am lying low in some remote outpost with only the media for company. I am feeling a little like the mother in Another Land who has a penchant for cd-roms and Discovery Channel. She has visited places but not remembered how or where she's encountered them.

Of late, I have noted a steady stream of commentaries addressing "everyday practices" of technology and virtuality. I've noted these writings because this is the subject of my current research. Joyce's stories, vignettes, and meditations seem to intersect some of those concerns, as they draw into focus the machinic pulse, the technological hum, the informational weave of everyday life. Largely, by "everyday" I am referring to Michel de Certeau's definition of "ways of operating or doing things" (xi): these are not merely the obscure background of social activity or of a body of theoretical questions, methods, categories, and perspectives. For de Certeau, those of us who use technology can also exercise choices in how we use them; we might "make" or "do" with those technologies in a tactical way that is not readily inscribed by manufacturers or marketers of those technologies. Desire, pleasure, and power figure large in this account of the everyday, as they also do in Joyce's stories. In "White Moths," an amusement park "whirligig" ride is purchased cheaply, bringing so much joy to residents of an Ontario locale. In several of the pieces, there is a laconic quality where the vignette seems to ease comfortably towards its ending, though not with any kind of finality. These are more like fragments of some larger, yet not obvious, narrative. They are illuminations which light and fade at different intensities, like a candle or a sparkler.

Importantly, the body is accounted for, in measure, in tandem, in circuit with technology. In "Colussus," Joyce's protagonist is an obese television celebrity who is weighted by his own corpulence, barely fitting into a screen shot. It is through the corporeal, through embodiment, that we "know" technology and virtuality. Katherine Hayles defines virtuality as "the cultural perception that material objects are interpenetrated by information forms" (13-14). She refers to proprioception - "the sense that tells us where the boundaries of our bodies are" (8) - to describe human relations with books and computers, or screen and print. Accordingly, "proprioceptive coherence...refers to how these boundaries are formed through a combination of physiological feedback loops and habitual usage" (8). Hayles argues that the integration of corporeal perceptions and movements with computer architectures and topologies has resulted in humans expressing cyborg subjectivity. A similar ground is covered in Joyce's writings: human interfaces with technology which produce shifted subjective experiences, perhaps cybernetic. Joyce's recollections of technology intersect with autobiographical scenes in his mediatations, such as his family's first television. Recalling the difficulty of understanding how the relationship between the world and the television differed, Joyce writes, "because of the sparseness of programming at first there was little sense of the television as a receiver, an apparatus picking among signals as we were used to on the radio. Instead the television was more like a camera...grabbing segments of what we did not know to call real time" (30). With his fourth meditation, Joyce addresses the concepts of recursion, virtuality and simulacrum stating that the three terms bring "choice" to the fore, requiring us "to come to terms with how we choose to live and in what sense we understand our present-tense experience and embodiment" (81).

Two longer essays are included in this anthology, both of which discuss literature, specifically reading and fiction. "The Persistence of the Ordinary" engages those ideas of the everyday from de Certeau and Lefebvre to discuss reading across media and mediation. He proposes that, among this flux of media, the question increasingly, perhaps urgently, presses: what do we make of the myriad viewings or readings" In "The Future of Fiction and Other Large Phrases," Joyce introduces fiction as residue and as ordinary mindfulness. In both essays, he meditates on hypertext practice, on what it has become and is becoming. He isolates the differand, like the hyperlink which simultaneously severs and links, or the extended captioning of graphics, of couplings and couplets. "From this persistent, referential point of literature, what is there for electronic writing to do? In various places I find myself, I have been beaten about the head and shoulders by the idea of the novel, the film script and the performance script. Exasperated, weary from having to 'defend' hypertext, I posture that these are technologically determined artforms, each so seamlessly adapted to their architectures and their reading/writing machines."

Helene Cixous has provided a brief afterword to Moral Tales and Meditations. She describes Joyce's texts as 'precipations' which are interrogative rather than conclusive. She writes, "let us call them tales of almost" (145). This "almostness," perhaps "not quiteness," confers a gentle liminality on the texts. It's as if the characters drift between multiple states, multiple becomings. It's as if the drift between the virtual and the real has assumed an everyday significance. In classical mythology, the god Hermes (Mercury) presides over liminality as well as communications. This motile deity forms connections across spaces, people, and boundaries. In much of this book, there is the sense that, for Joyce, everything connects, keeps connecting, making ever more connections. As if on some Deleuzian journey, Joyce seems to revel in those connections, having faith in what might become of them.

. “Tales of Almost”, Electronic Book Review, July 19, 2002, .
Readers wishing to respond to an essay in ebr may send ripostes or short glosses to the journal’s Managing Editor, Will Luers.
PDF

other essays by
Linda Carroli 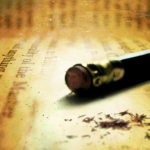