Dragica Felja on the Peripatetic Poetry of Miroslav Mandic.

Miroslav Mandic is in his forty-eighth year. His strong features lend him a rough look. He definitely looks. He is dressed in blue, wearing sneakers and a backpack. He can often be seen reading on the move. He also wears his glasses on those occasions. In a catalogue, he once wrote the following about himself:

1949 - 1969
Child, a boy, fatherless.
Not too extreme poverty.
Football.
Yearning for justice.
Fire inside my head.
Film.
Efforts towards finding taste.

1971 - 1981
Abstaining from art to the point of pain and dissolution.
Punishment and guilt.
Prison.
Lostness, until freedom.
Not-knowing.
Non-humanity.
Spirituality.
Eradication.
Astonishment.
Mysticism.

These fragments, this outline may be filled in by reading Mandic's works, which tell us the following: He was born on the outskirts of Novi Sad. His father died when he was eight. His mother was cleaning up offices, hence the "not too extreme poverty." Lunch eaten from newspapers. Cutting shoes open when his feet grew too large for them. Slightly rotten apples. Bread and margarine. He used to play football in the junior team of the "Vojvodina" Football Club and according to the words of local football freaks: "He would have made a significant career if he had continued to play." In 1970 the twenty-year-old Mandic became involved in art as the founding member of the art group, "KOD," which was, along with the Slovenian group "OHO," the representat ive of Yugoslav conceptualism. Feeling the need for a more profound experience, he ceased his artistic activities after a year, when his last, farewell article, published in the literary journal "òJ SIMPOSION" got him sentenced to nine months in prison. "I was and have remain guilty. However, my guilt is much greater than my sentence. That is why I write, in order to scream, so that I would scream one day. Until then I want to sing, because if not for music then why was I in prison?" (No, I Don't Believe This Sentence Cannot Be Heard - the book he wrote thirteen years later about his prison days).

Having served his sentence, opting for not-knowing, non-humanity, patience, sluggishness, and shame, he spent ten years in anonymity and asceticism. During that time he "devoted" himself to beating carpets, working in a potter's workshop, at a building site... Eventually, in 1981, he got involved in art again.

According to the words of film director Dusan Makavejev, Miroslav Mandic is the "creator of new trends." He is by all means one of the most influential figures for young artists. Working with film, the visual arts, and literature, he uses walking as his chief method of expression. Complete devotion, according to him, is the "everyday involvement in a perpetual present." In reality, he seems to be weaving a single imaginary, virtual thread through all of his creations, not excluding his own self - which by now is no longer distinguishable from his art. He says: "I want to make my life into a Henry David Thoreau poem or a verse illustrating Witgenstein's dying words, 'Tell them I have lived a wonderous life.'"

Mandic's work as an artist began in 1970. Besides his early involvement in the group "KOD," his chief work consists of the following:

"A Man" - Taking photographs of his own face once a month until the end of his life, which, according to him, sprang forth "out of a supposition that wonder lies within myself, that instead of waiting in expectation of a wonder I shall simply wonder and produce wonders."

Mandic created his first ten-year project, "Leaves - The Tree of Life," between 1975 and 1985. A total of 3650 sketches make up a complete picture whose size is 2.7x20 metres. A picture which is the affirmation of: affirmation, the invisible, repetition, creation through time.

He started making use of walking as a form of artistic activity ever since his 1983 performance, "A Road to America or the New Life of the Indians": eight hours of slow walking along a path eight metres in length, accompanied by eight centuries of music from the 12th to the 20th century, selected by M. L. Pashu.

Four walks for poetry were to follow in 1984: from Radicevic to Njegos and Presern (Strazilovo - Loven - Kranj); from Presern to Friedrich Hölderlin (Kranj - Tübingen);from Hölderlin to Rimbaud (Tübingen - Charleville);and, finally, from Rimbaud to Blake (Charleville - London).

"The Twelve Copied Novels" (1985 - 87), twelve pictures (50 x 70 cm), were created by transforming words into pictures, by copying twelve novels by Yugoslav authors to the letter, thus producing an energy of admiration.

In 1987, in The Museum of Contemporary Art in Belgrade, as a part of the performance, "The Writing Man,"Mandic spent nine months publicly writing a novel. Two manuscripts came to life as a result of this experience: "Scenes from the Museum" and "The Writing Man."

The year 1989 saw the performance bearing the title, "A Public Cleaning of the Public Lavatory in Banja Luka" - dedicated to Mahatma Gandhi.

He is currently engaged in his second ten year project, "The Rose of Wandering" - ten years of walking across Europe, beginning where the previous Poetry walks left off - in London, from Blake's grave.

No I Don't Believe This Sentence Cannot Be Heard (1987) is a book about prison. "Singing gently into the reader's ear."

Four poetry walks yielded three books: Walking for Poetry (1988), A Child a Boy (1991), The Innocent Path (1992), while five out of ten volumes of The Rose of Wandering have appeared.

A diversity of forms and ways of expression in his books and works make Miroslav Mandic a uniqu personality, to whom classifications and subdivisions into aesthetic genres are of no importance. Let us quote the author himself:

I am a poet because I write poetry because by writing I beguide (seduce and lead) the world.
I am a poet because for a poet the whole world is but a tiny poem.
I am an artist because an artist creates out of nothing and nothing seen.
I am an artist because an artist gives birth and that which is created lives in eternity.
I am a philosopher because I only observe and by doing nothing I safeguard the world with wisdom.
I am a fool because I am free and beloved by God.
I am a fool because I utter that which others dare not.
I am a wanderer in order to commend myself unto God's arms.
I am a wanderer for I do not even seem to have myself.
I am a beggar and I beg so that others wouldn't reach bottom.
I am a beggar so that I could beg and beg for others, so that I could say thanks and praise others.
I am a monk because I am beatified not only by my life but also by my birth and my death.

ten years of walking across europe

" The Rose of Wandering is for me the most exciting project I know of at the moment... Ten years of one man's life transformed into ten years of art. Such an abundance leaves one simply breathless, augmenting the feeling of being lost before the edge of infinity. However, Mandic's wanderings, that network of wanderings which will eventually interconnect the whole of Europe in a real/unreal way, restore the feeling of safety to us and renew the sense of things. Mandic's Rose is a magical rebirth of a long-lost unity, a path towards serenity." --David Albahari

The best way to start the story of the ten-year project "The Rose of Wandering" is with a section from the book No I Don't Believe This Sentence Cannot Be Heard:

I reach out towards the sky
and I say:
That is art.
Why?
Because no one has seen it.

Having spent almost three years preparing for it, Mandic made the first step of The Rose of Wandering from Blake's grave in London on September 9th, 1991. Since then he has walked 20 km each day which, in five years, adds up to about 35,000 km. Until t he end of the project in 2001, the trail of the blue virtual rose will be 60,000 kilometres long. In the course of his walks, Mandic compiles his poetic notes which are published every year in book form. Apart from that, his pencil leaves a trail of sketches, one each day, depicting herbs, contributing to the cycle of 3650 sketches under the title, "The Herbs of Europe." His solemn Sunday walks, "Monuments to the Anonymous Forces of Love" and "I Ask for the Passport of the Man on the Move," are in fact a sub-project of this ten year project. Pausing from his walks in cities, Mandi} has given two series of lectures during the fifth and this, the sixth, year of The Rose of Wandering.

Mandic's three basic symbols are the road, the rose, and the act of wandering. He defines the road as follows:

"...the largest man-made structure in this world. Man's greatest achievement. Unlike houses, which eventually fall into ruins, roads last forever. I have had some little experience of the road's tolerance and wisdom. In ten years, I think I shall become an excellent student of it.":

To Mandic, the rose is:

"A world of non-violence. Non-violence takes the greatest courage of all, and that is why the rose is a hero. I think of the rose as a future teacher of harmony. The rose is food for the soul."

He says the following of wandering:

The Rose of Wandering is on course. We can learn about this blue flower which springs out of European ground by walking along with Miroslav Mandic, picturing a virtual flower sprung from human footsteps, visualizing the joys and experiences of this great wandering which is reminiscent of Homer or Joyce, or reading the volumes of The Rose of Wandering, which are defined by Mandic as alternately a novel, a poem, a journal, and a religious text.

Poetry is beauty and gentleness. A novel is humour and music. A journal is wisdom and sincerity. A mystical text is freedom and the divine.

These books give us the opportunity to wander ourselves, to read them in countless ways and adopt parts of the journey. For instance:

The lives of women and bridges along and over the Rhine. I get lost in big cities like bread-crumbs do in a whirlwind, and the smell of all those, who, like myself, crawl along this Earth clings to me, so much so that, whether I want it or not, I am a man. This means that in some years I shall disappear, along with everyone else, from the face of this Earth. I am calm, I am here now. My groin feels warm. My soul is getting warm inside my body. I hurry across the tracks in front of a streetcar. Along the street, across the street and along the other side. It is so wondrous simply to be.

. “The Rose of Wandering”, Electronic Book Review, January 1, 1999, .
Readers wishing to respond to an essay in ebr may send ripostes or short glosses to the journal’s Managing Editor, Will Luers.
PDF 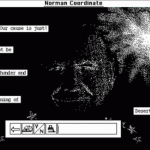 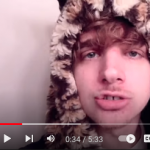 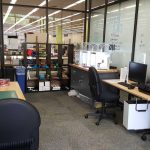 Restoring the ‘Lived space of the body’: Attunement in Critical Making