Bernardo Schiavetta: a definition (in 2000 words)

This text proposes a series of definitions, the aim of which is to better circumscribe what is, and what is not, meant by writing under constraint. I shall do so by using exclusively logical and objective criteria. Of course, this does not mean that aesthetic or ideological problems are of no concern here, on the contrary, but it wouldn't be serious to tackle these very complex questions as long as there exists no precise definition of constraints.

The constraint is a term rooted in the Oulipo vocabulary. The Oulipians, who never gave a rigorous definition of this key notion, have inherited the word from ancient and classical prosody. Constraints are not, however, a literary phenomenon claimed solely by the Oulipo; they are universal and can be found in any literature, from any era, and in any tradition. The Oulipians acknowledge the existence of what they call "plagiaries by anticipation" and fully recognize the existence of a non-Oulipian set of works under constraint. One should stress, however, that certain constraints are undeniably or typically Oulipian, and the use of the term has become familiar in literary theory thanks to the study of some great Oulipian authors such as Queneau, Perec, and Calvino.

Constraints in writing can be more or less restrictive, but in general one chooses to make use of them in a playful, even aesthetic spirit. Restrictions are a characteristic of all choices and all obligations: the very making of choices always signifies a restriction of possibilities, and for this reason a logical definition of constraint cannot be based on the notion of restriction. In a literary context, constraint always designates a "freely chosen constraint." In ordinary language, however, it evokes an idea of obligation, hindrance, and lack of freedom. Despite those negative connotations, one should maintain the word "constraint," for the simple reason that its use is now acknowledged and unchallenged in literary theory.

Some texts are perceived as being spontaneously written under constraint, while others are not. On this empirical basis, I will propose some basic criteria for a definition of constraint. My hypothesis will only make use of falsifiable statements, i.e., those that are subject to challenge. Hence, my definition will not be concerned with whether a constraint is easy or difficult to apply, or with its degree of visibility or readibility in the text. The threshold from which a constraint ceases to be easy and becomes difficult, or ceases to be invisible and becomes visible, is inevitably a subjective one, and is, therefore, of no use in a general definition of constraint.

This remark brings us back to a truism: since human language is not "motivated" (or Cratylian), all texts are inevitably the result of a set of artificial, i.e., conventional and arbitrary, rules. Everybody knows that all texts obey linguistic rules such as spelling, grammar, or syntax (to which one should add less visible but not less imperative rules such as the Gricean conversation rules or various typographical conventions such as word spacing). All these rules are to be considered systematic textual devices, i.e., instruments enabling the writing and the reading of a linguistic utterance. Technically speaking, I would call these rules textual "norms," i.e., systematic textual devices that are the a priori tools of any written verbal communication.

constraint as a transformation of linguistic norms

Given the fact that they are a priori tools, "norms" are usually not perceived by the reader. One only perceives them when one decides to study them or when one is struck by an irregularity (error or deviance). And given the fact they are systematic, norms apply to the text globally. Nevertheless, the global norm does not saturate necessarily all aspects and dimensions of the text, it only saturates the whole set of occurrences of one particular type of textual unit at least. This is what I call specific saturation of norms. The choice between the singular or the plural form, for instance, normally does not concern all the letters of a word, only the final ones. Although norms generally apply only to specific textual unities (morphological, syntactic, semantic, logical etc.), their use is nevertheless systematic. I would like to specifiy here that exceptions in the application of a norm are perfectly systematic, for they are always codified (think for instance of the irregular tenses of some verbs). If every textual norm is per se a systematic textual device, every systematic textual procedure is not per se a norm. My definition of constraint goes like this: a constraint is a systematic textual device that obeys the principle of specific saturation but which is not a norm in itself. Constraints are pseudo-norms. Indeed, since a constraint is not less systematic than a norm, it applies to the text following the same logic of specific saturation, i.e., it adds or abolishes or changes one particular type of textual unit at least. When the constraint is anagrammatic, for instance, its application only concerns the letters of the text, but does so in a way that concerns every single letter.

Given the difference between constraints and norms, the former can never be a priori tools of written verbal communication. In other words, any constraint opposes the fundamental norm of "freedom" in writing, i.e., the freedom at any moment to make a choice among several rhetorical features. When using constraints, one decides to write this way and this way only. But, of course, constraints, just like norms, can have some forms of codified exceptions or application errors: here also, the rules can be broken for several stylistic reasons: surprise, dissonance, etc.

Constraints differ from norms in four ways following four major mechanisms already studied by the Groupe Mu in their General Rhetoric (once again, the examples I give are elementary, but they have no other aim than to make things clear).

a) addition: a constraint can be nothing more than a systematic textual device simply added to a text obeying all other textual norms: this is what happens in classic versification;

b)abolition: for instance that of the lipogram, which prevents the author from using certain letters;

c) abolition + addition: for instance that of spelling systems (a device used by contemporary authors such as Katy Molnar or Jacques Sivan, who replace the conventional spelling system in French with their own system;

d) permutation: for instance that of the anagram, based on the permutation of all the letters of a text.

I will now add a fundamental new distinction which, for reasons of clarity, has been deliberately omitted until this point: the opposition between a constrained text and a textual constraint.

These distinctions may seem naive and childish, but their consequences reveal astonishing differences. But before discussing them, let's consider an example: Perec's La Disparition (A Void).

Third comes the material result of this action, what I call the constrained text: in this case La Disparition, characterized by the objective intratextual trace of the lipogram.

Fourth, the trace in question really becomes objectifiable once it is recognized by the use of a reading grid enabling us to pay attention to the absence of the letter "e" throughout the whole text. This is what I call the reading constraint.

Constraints are thus revealed in three complementary and interdependent modes: constrained texts, writing constraints, and reading constraints. Often, the interdependence of these three modes masks their very differences, which raises a serious problem to any general theory of constraint. Nevertheless, I assume my analysis offers a new take on a classic crux in this theory: the existence of texts that are written under constraint but which are impossible to read as such, for the simple reason that traces of the constraint have been erased during the production of the text. Raymond Roussel's Impressions de l'Afrique provides a good example of this; without the help of some posthumous revelations, we still would not know the systematic composition procedure he used. In my view, such texts obey writing constraints that are independent (instead of interdependent) of any reading constraint, and which, for this reason, cannot be objectified in the text.

A similar and no less classic case is overinterpretation. In a properly allegorical text, for instance, the author normally indicates with great clarity - inside or outside the text - that the text signifies something else that is not named directly in the words themselves. In such a case, the allegorical writing constraint goes accompanied by an allegorical reading constraint of an allegorical constrained text; however, one often discovers allegorical (or other) overinterpretations applied to texts, the constrained character of which can never be materially determined. Moreover, one should underline the point that an allegorical reading can always be invented by any reader and applied to any text (Borges gave some ironic examples of this reading infidelity; for example, he suggested we read a medieval treatise on devotion as though it was written by the Marquis de Sade). In this case, one is dealing with reading constraints independent of writing constraints, as such, and they cannot be objectified in the text.

I would like to summarize my theory of constraint by bringing together two criteria, the presence and activity of which can be globally recognized or denied:

1) the feature of "non-normative systematicity," which suffices to define all reading and writing constraints;

2) the feature of "textual objectivation" of this non-normative systematicity, which helps to define the field of constrained texts produced by the common action of reading and writing constraints.

. “Toward a General Theory of the Constraint”, Electronic Book Review, January 1, 2000, .
Readers wishing to respond to an essay in ebr may send ripostes or short glosses to the journal’s Managing Editor, Will Luers.
PDF 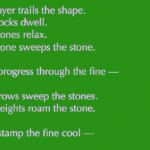