Perloff comes back with an alternative line of 'evolution' from the modern epic - one leading to language poetry, rather than the magical realist novel.

Franco Moretti rightly points out that in my review of Modern Epic, I did not discuss the Darwinian paradigm that ostensibly organizes his study. "Darwinism," writes Moretti, "sees precisely in morphological imperfection proof of the evolutionary path" (page 5), and again, "In Darwin...history is the interweaving of two wholly independent paths: random variations, and necessary selection. In our case: rhetorical innovations, which are the result of chance; and a social selection, which by contrast is the daughter of necessity" (page 6).

I did not evaluate this paradigm because the fact is that Moretti's actual discussions of the various "epics" that interest him owes little to it. But if I now ask myself why I found Moretti's conclusions unsatisfactory, it may well be that he did implicitly rely on the model and regarded the "social selection" of Garcia Marquez's Macondo as the "daughter of necessity." When I said in my review that this choice was "something of a cop-out," what I meant is that a more stringent reading of the Darwinian process, as it has worked in our own culture, would have produced different results. Moretti assumes that the place to look for heirs of the Joycean novel is in other novels and hence he turns to the "magic realism" of another culture. But why must the Darwinian paradigm work this way? If we examine the evolution of the Joycean epic in its own context, "social selection" would lead, I think, not to "epic" novels like One Hundred Years of Solitude but to the hyprid "epic" texts of our own moment - texts such as John Ashbery's Flow Chart or Kenneth Goldsmith's recent No. 111.2.7.93-10.20.96, a 606-page work that uses various generative devices to present everything the author said and heard being said over the period between February 7, 1993 and October 20, 1996, in a mode that carries Finnegans Wake to certain logical conclusions.

In other words, despite his search for "necessary selection," Moretti seems to assume that selection moves in a straight line: the successor of Ulysses must be another "novel," however different. It is this expectation that made me conclude - wrongly perhaps - that Moretti is nostalgic for nineteenth-century literary paradigms. The thesis seems to be that evolution can only mean spatial reorientation (to the Latin America of Garcia Marquez, the India of Salman Rushdie) rather than to temporal transformation of the paradigm. And the assumption behind this thesis would seem to be that our own late Capitalist culture is currently too awful to yield up anything fruitful. Hence renewal can only come from the exotic Other.

This is not the fault of the Darwinian hypothesis. But since that hypothesis can yield so many different results, it strikes me as not being especially useful. And that's why I did not bring it up, my sense being that Moretti's brilliant individual insights and suggestive readings were much stronger than his larger not fully fleshed out hypothesis.

. “Epic Ecologies (III)”, Electronic Book Review, February 1, 1999, .
Readers wishing to respond to an essay in ebr may send ripostes or short glosses to the journal’s Managing Editor, Will Luers.
PDF

other essays by 222
Marjorie Perloff 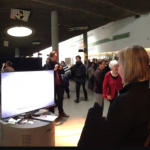 Critical Attention and Figures of Control: On Reading Networked, Software-based Social Systems with a Protective Eye 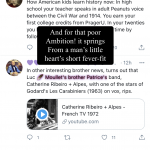 How to Re-Hijack Your Mind: Critical Making and the ‘Battle for Intelligence’ 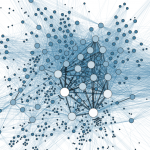