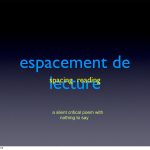 This introduction is not a "digital" essay, but what follows it - a version of a moving essay-poem originally presented in real time at the 2012 elo conference - is. Florence's presentation explores how the "espacement" (Mallarme, Derrida) intrinsic to all writing changes in a born-digital context. The work reminds us of something we anticipated early in the formation of ebr - that 'critifiction' is and always has been the way to make essays in the digital era.

Spacing Reading: Digital language and the differential, or “inextrinsic”.

Pointers to reading the digital essay below:

Is digital poetry really “about” the visual?

There are those who think so. I don’t. But it does significantly impact the visual in language. Furthermore, language, images and visuality have all changed in the digital era.

The essay below aims to show this by picking up what Mallarmé, and Derrida after him, call “spacing reading.” It sounds simple. But it takes you to the heart of what is innovative about digital thought.

The essay is a poetic exploration of how digital writing and reading operate in a new dynamic, exploring existing pathways and structures, innovatively correlated. But this simple change in relations - this new dynamic - does something further. Not only does digital reading/writing make visible and active existing structures of reading and language, it also creates new ones.

“Spacing Reading” aims to foreground the critical potential of the shift in dynamics and the capacity it enables to redefine language relations, such as syntax, semantics, translation, genre.

What might it mean to “space reading”? The person-who-reads and the text-that-is-read are already different from two people talking directly to one another. The relations between human Subjects have been technologized, and the space of the encounter abstracted. Introducing a digital reader – a program that moves through a text to alter how it appears – takes this to another level.

Digital language operations make legible that which we could not previously articulate. They do so by making visible interrelations that previously could only be intuited.

The existence of the net necessitates new understandings of language and languages. It does so because of digital operations in and of themselves, and because of the bringing together of global languages and cultures in unprecedented, and potentially innumerable, ways.

Poetry sits in an unstable location at the shifting boundaries of both linguistic and visual thought. This re-location of poetry and poetics brings the changed visuality of digital language into sharp focus.

I emphasize that this change in visuality is not about some putative "boundary between linguistic and visual thought" ("boundary" in the singular), because putting it this way would imply that there always is such a boundary, and that it divides the verbal from the visual. It would install a division as uncontestable, inevitable.

What actually exists is a differential, not a division. They are conceptually quite different. A division is generally between two elements. Even if a differential apparently starts between two elements, it becomes multiple and more far-reaching, because it does not exactly match any such elements, and because it concerns rates of change. Digital media have of course accelerated the rate of change, but more importantly, they have done so in redefining ways that do not affect previous factors in the same ways.

Among the implications of this is that mobility is not what defines the difference between a division and a differential. It is that a division separates and a differential articulates relationship/s. If you change how the relations between means of communication and signification are articulated, you change how meanings are produced. The impact on the verbal is not the same as on the visual.

The fundamental model has become one of complexity rather than separation: rather than staying with the notion that words do one thing and images do another, a differential understanding both recognizes that they are not identical, and that they are imbricated with one another: it is inextrinsic.

If this sounds more difficult, I don't think it is. It changes what is difficult. It is part of my argument that electronic writing is potentially clear in new ways, creating new signifieds. This is one place where the differential model departs from Derrida, who is invoked in the notion of 'spacing' in the presentation that follows. Very briefly, the 'différand' implies endless deferral as well as division.

The differential does neither. Perhaps controversially, I'd say, by contrast, the 'différand' appears essentially pre-digital. A differential model changes what was ineffable. Out this, new meanings are born.

Those forms generally known as visual poetry are not the same as digital poetry. Though they share commonalities, they belong to an era before digital media changed how we see. There is much to be explored here, though this is not what I want to do now, because the piece I am introducing is about digital reading and digitally originated critique rather than about antecedents.

The text that follows is a version of an animated, screen meditation on reading digital poetry in light of what I have just outlined. It was shown at elo 2012 in its original form, as a moving-image projection, but for ebr it has been edited to be read as a variable sequence of stills. So it has been transposed: from a paced, timed, moving essay-poem into a variation on the photo-essay, but already changed by its origin in digital form.

That is to say, originating work on and for screen always already changes it from originating it on or for paper. This introduction was written on my computer, but it uses none of the digital potential explored in the piece it aims to introduce. So it is not a digital essay. What follows, though, is what I would call a digital essay.

. “Espacement de Lecture”, Electronic Book Review, October 1, 2013, .
Readers wishing to respond to an essay in ebr may send ripostes or short glosses to the journal’s Managing Editor, Will Luers.
PDF 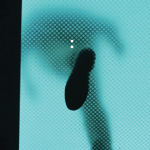