Lev Manovich makes the first sustained case for a new media theory, but with cinema as his starting point he has a hard time engaging the non-representational artforms and aural explorations to be found there. So argues the Australian media writer, geniwate.

Lev Manovich starts The Language of New Media with reference to an avant-garde film of 1929 called "Man with a movie camera" by Dziga Vertov. I thought I would commence my review of his book with a reference to a contemporary work of new media called biennale.py, created by 0100101110101101.org and EpidemiC for the Venice Biennale.

Biennale.py is a benign computer virus written in a new language, Python. "The main goal of our virus is just to survive," say the authors. "And, it can better survive when it doesn't do any harm to the host." There are a variety of ways this work can be interpreted, including politically and aesthetically (the code can be found here).

However, when biennale.py is installed it becomes an invisible part of the computer's programmed environment. In this mode of existence, the work has no visible representation at all. Nevertheless it is doing what it is designed to do, and according to the authors and the Venice Biennale, it qualifies as art - new media art. How does this sort of work fit in to the paradigms of The Language of New Media?

Born in the USSR and now living in the USA, Lev Manovich sees himself as a "post communist subject" (Tribe, Preface xi) and a hybrid theorist and worker in new media. In The Language of New Media, Manovich is attempting "both a record and a theory of the present" (7). He attempts to relate new media "within the history of modern visual and media cultures" (8). He does this by trying "to describe computer media's semiotic codes, modes of address and audience reception patterns" (7).

Manovich is self-consciously making a first theory of new media, aware that his views will be highly critiqued as soon as the dust-jacket ink has dried.

The author believes that cinema is the key cultural form of the twentieth century (9). Furthermore, cinematic ways of seeing the world have become the basic means by which computer users access and interact with all cultural data (xv).

This intellectual debt to cinema results in some interesting observations. For example, Manovich discusses the commitment amongst new media developers and software programmers to realism, regardless of the fact that new media images are simulations, and therefore not indexically "real" (184). It is reasonable to interpret this as an attempt by new media creators to continue in the tradition of cinematic realism. However, it is less obvious that this is an appropriate or inevitable result of new media, as Manovich seems sometimes to imply (180, 196).

While Manovich discusses the ultimate impossibility of realism in new media, reference to non-realist traditions in modern art are quickly glossed, and his assertion that new media is not "an inferior representation of our reality, but a realistic representation of a different reality" (xxiii) is not fully explored. This unwillingness to completely engage with non-representational artforms may be attributable to his intellectual debt to cinema.

Manovich proclaims that the recent "revolution" in media production concerns the translation of all existing media into numerical data accessible through computers (20). In my opinion, Manovich has rightly discerned the "most fundamental quality of new media that has no historical precedent - programmability" (47). He introduces the concept of transcoding. The computer has become "a media synthesizer and manipulator" (26) and as such, new media is the result of a blend of human and computer meanings (46).

Manovich could have spent more time exploring the aesthetic and ontological implications of the programmed nature of new media. Instead he concentrates on the debt of new media to cinema and as a result foregrounds visual culture much more than any other type. The number of times he refers to audio artforms could probably be counted on one hand.

Perhaps the most interesting chapter is "The forms," in which Manovich discusses the significance of the database (used here in a non-technical sense) as the organising principle for programmed media, which has become not only a new way to store, sort and retrieve data (and then reconfigure it) but also is "a new metaphor for conceptualizing individual and collective cultural memory" (214).

Opposed to this organising principle is another new media ideal, which is that new media objects should be "immersive," in the way that literature and cinema are traditionally considered:

One of the main traditional techniques for immersion is narrative. Manovich questions the possibility of narrative given a database structure, which enables equality of access to all files, and subverts the sort of progression that narrative depends upon (221). He proposes that narrative may be replaced by a new "cultural algorithm," which is:

He goes on to suggest that narrative is a challenge currently facing new media artists (xxviii). This is an important point that I would have liked to hear more about. (I suspect a solution will be found in which future new media artists will more fully incorporate game mechanisms and sophisticated approaches to variables in their work.)

Once again Manovich perhaps overstates the conceptual debt of new media to cinema in arguing that cinema "exists at the intersection between database and narrative" (237) and foregrounding Vertov as a "database film maker" (239). On Manovich's criteria, I suspect many artists are database artists - certainly the process sounds very familiar to me

At the level of individual ideas and insights this is an invaluable book. But whether Manovich achieves his big-picture ambitions is doubtful, and that's where biennale.py comes in.

Biennale.py cannot easily be related to cinema. It is a "performative" artwork that is dependent on a programmed environment. The graphical user interface and hardware monitor that accompanies contemporary computers and makes clear reference to cinematic heritage is barely relevant to the "performance" of this work.

Manovich's analysis of new media does not make room for such works as biennale.py. Thus we have reached the limits of the argument for continuity. Manovich says:

New media objects are cultural objects; thus, any new media object can be said to represent, as well as help construct, some outside referent. (15)

The implicit question posed for Manovich by biennale.py is what does it represent? These coded, performative works are, perhaps, the "abstract art" of new media.

The Language of New Media is beautifully published and contains a useful index. The scholarship is impressive. Unfortunately it suffers from under-editing. The cursory nature of the proof editing results in many uncorrected typographical and spelling errors. A more in-depth structural edit may have decreased the number of repetitions in the book.

There is much to engage new media theorists and artists in The Language of New Media and I don't hesitate to recommend it. However as a grand narrative The Language of New Media is at most a partial history of a genre that is so much in flux that parts of the book are already out of date (for example, since it was published a most convincing animation of human hair has been created in the film Final Fantasy).

The continued relevance of cinema to new media appears to be thrown into doubt by Manovich himself at the end of his book:

This opening up of cultural techniques, conventions, forms, and concepts is ultimately the most promising cultural effect of computerization - an opportunity to see the world and human being anew, in ways that were not available to "a man with a movie camera." (333)

This ending surprised me, and also left me wondering what the icon of new media art might become (as Vertov's movie camera is for cinema). The computer screen? Zeros and ones? Files and folders? Or might it be inappropriate to consider visual symbols at all - how do you represent a database or an algorithm? Is iconographic representation viable? And if not, surely we are dealing with quite a different medium than cinema.

Perhaps contemporary media theorists and artists are too influenced by their engagement with old media to successfully write this book. Perhaps the book could be re-written as a collaboration between a digital visual artist, a digital audio artist, an electronic writer and a programmer (and probably others). Perhaps we should wait ten years for younger hybrid "artists" with a more mature "language" than the one we are currently trying to twist to suit a culture that is currently obscured by past arts.

I guess the book had to be attempted, and it is an act of bravery and considerable insight to have done so. But we will have to wait and see whether the new artists and theorists will be standing on Manovich's shoulders.

. “New Media and Old: The Limits of Continuity”, Electronic Book Review, August 20, 2002, .
Readers wishing to respond to an essay in ebr may send ripostes or short glosses to the journal’s Managing Editor, Will Luers.
PDF 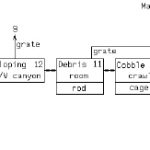