In the summer of 2004, I was approached by my friend Greg Moccia with a unique task: to design a live-action role-playing event at which he could propose to his girlfriend. The resulting game was A Measure for Marriage, a one-session LARP in which players took the roles of nobles and attendants as they attempted to find romance, thwart villainy, and restore true love in an improvised Shakespearean comedy. Of course, designing a LARP about romance that must end with a real proposal is a daunting task, and the success of A Measure for Marriage was a result of careful use of character design, emergent pacing, and player expectation.

A Measure for Marriage was held at the Brooklyn Botanical Gardens and set in the fictional Renaissance kingdom of Navarro. Six of the players were assigned roles as nobles of the region and another six were their attendants. I played the role of the King's seneschal, which gave me the ability to speak to anyone at any time and to keep a close eye on the game as it unfolded.

The nobles were organized into three couples, betrothed to each other for political or financial reasons. However, the relationships were ill-suited and lacked any real love, a fact that the attendants knew well and discussed openly amongst themselves. Marianna (played by Greg's girlfriend) was the king's daughter, who was herself to wed a charming young prince (played by Greg). Unfortunately, the princess was also being wooed by the King's power-hungry advisor (an NPC), who conspired to send the prince off to war and have him murdered. The would-be-murderer (another NPC) had a change of heart at the last moment and merely left the prince unconscious and amnesiac on the battlefield, where he was found by a noble and made into an attendant.

In the meantime, presuming the prince was dead, the King assented that his daughter should be betrothed to the advisor, giving the villain a chance at the throne and the power to abuse the region's attendants, which he did with impunity. All looked to be in order in the kingdom, but beneath the surface lay disappointment, loneliness, and wickedness.

The session itself was narrativized as a meeting the King called shortly after the tragic death of his wife. The LARP began with the King announcing that, after reflecting on the true love he and his Queen had shared, he realized all of the noble couples were mere political shams. He then declared that marriage was forbidden in his kingdom.

At this point, the players were left on their own to talk, conspire, and commiserate over the King's declaration. Realizing the folly of the King's decision, Some of the marriages were between warring regions, and all of Navarro might be plunged into war if the weddings did not take place. they pleaded with him to rescind his announcement. He agreed to reconsider, but only if the nobles could convince him of their love through a series of trials, or measures for marriage. However, as the nobles spoke in the gardens to prepare for these trials, they discovered that their true loves were among the other nobles. The players then decided to pursue these new loves, scheming to ensure everyone got what they needed politically while romancing among the roses.

In the meantime, as the attendants gossiped amongst themselves, they discovered the amnesiac lost prince among their number. They quickly decided that restoring the lost prince would both return the princess's happiness and remove the loathsome advisor who was constantly torturing them. Of course, they also realized that the villain wouldn't hesitate to crush them all if they tried to reveal the prince's identity, so they first conspired to expose the advisor's villainy and thus remove him from power. The attendants pumped their nobles for information, cajoled and blackmailed the advisor's servants, and protected the prince from scrutiny, all while fulfilling their responsibilities as servants.

The core idea of A Measure for Marriage was to create a story that would provide a natural environment for the proposal to take place. Of course, this idea directly tackles some of the inherent issues of LARP design including the lack of a fixed plot, the simultaneous activity of several autonomous players, and the absence of a central authority guiding every moment of the experience. The game had to end with a marriage proposal, but for it to be an effective LARP, it had to reach that ending as a result of independent player choice. In addition, the moment of the proposal could not feel contrived. Thus, it was essential that the entire experience be themed around love and paced properly to culminate in the wedding proposal. So, how could I ensure that, without knowing exactly what they would do, the players would act within the theme and develop a story that would naturally result in the predetermined proposal?

The key decision for reigning in this unpredictability was the choice of genre. A Measure for Marriage was a Shakespearean comedy LARP, a period piece in the tradition of A Midsummer's Night's Dream and Twelfth Night. Shakespearean comedies have a number of standard tropes of which my players were well-aware: mismatched lovers, people in disguise, villains to be thwarted, and a wedding proposal conclusion. Because the players were so familiar with the genre, they naturally adapted to its anticipated narrative structure, engaging in witty conversation, oaths of love, and comic scheming.

In particular, character design was a crucial component. Players had character sheets (composed by Greg and myself) to give them directions about their roles in the setting. Every noble sheet, for example, gave an explanation of the character's backstory that both pointed out their specific dissatisfaction with their current fiancé and their pining for the kind of person they could truly love. These details gave the noble players hooks to pursue; while I had no idea exactly how they would resolve them, I knew their motivations were theme-appropriate. This careful character design, coupled with the pressures of the game's genre, guided the players to make choices that were completely unexpected Including impromptu schemes, blackmails, betrayals, near-declarations of war, and even a full recital of a monologue from Much Ado about Nothing. but entirely within the bounds of the romantic theme.

Of course, the potential issue with the familiarity of the genre was that players could act on these plots too quickly and rush the game to its conclusion before the tone was set for the proposal. To solve this problem, I used a set of control devices called gates. In A Measure for Marriage, players were limited in the ways they could communicate, in a manner reflecting player expectations of class. Nobles could speak to anyone, but amongst themselves, it was gauche for nobles to discuss anything serious, including politics, economics, and especially issues of romance. Servants could speak to each other freely and could attend to their own noble, but were not permitted to speak to other nobles or the King. This restriction meant that any vital communication between two nobles had to be handled through attendant intermediaries.

At the same time, the King's demand that the nobles prove their love (through such measures as vows, praises, and songs This was particularly comical, as none of the players knew in advance that they would have to do this, so they were forced to make up praises on the spot for a person that their character loathed.) meant that the nobles were periodically called away from their attendants for stretches of the game. Since any major action of the game (confessions of love, blackmailing the advisor's henchman, restoring the lost prince's memory) required joint actions of nobles and servants, these actions had a natural duration that depended on attendants having time with their nobles to get information and share plans, and having time away from them to scheme and negotiate with the other servants. The use of these communication gates allowed me to pace the game's progression without any heavy-handed techniques. Despite the fact that players had total control over their actions, there were naturally emerging limits that brought the game to resolution in the target four hours.

By the conclusion of the LARP, players had resolved the outstanding plots, uniting the correct couples, condemning the villain, and revealing the true identity of the lost prince. All that remained was the proposal, the classic end of any Shakespearean comedy and this LARP's moment of real-world consequence. Of course, because of the generic conventions and the strong romantic theme, everyone had been expecting a proposal for the last four hours of play, so when the lost prince started his declaration to the princess, everyone was emotionally prepared for what was coming. However, when Greg broke character and delivered his wedding proposal to his girlfriend (rather than her character, the princess), everyone was shocked by the shift to this real-world announcement. The LARP ending offered the natural cathartic resolution of the romantic story, while simultaneously providing a dramatic context for the public display of a real-world engagement.

Ultimately, A Measure for Marriage was a narrative experience of love, loyalty, and union. The choice of genre and characters, the use of gates to control pacing, and the conflation of in- and out-of-character emotions and expectations led to a unique and compelling story. As with all happy endings, the kingdom was safe, the characters found happiness, and the players experienced a powerful performance of love and fidelity.

Fortugno, Nick. “On A Measure for Marriage”, Electronic Book Review, March 30, 2008, Fortugno, Nick.
Readers wishing to respond to an essay in ebr may send ripostes or short glosses to the journal’s Managing Editor, Will Luers.
PDF
This essay was peer-reviewed. 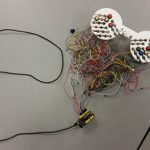 Playing with the Mythos

Field Notes from the Future of Publishing