Van Leavenworth, in his response to Hite, delves more deeply into Cthulhu's literariness, in particular the "large adventure book 'footprint'" of the series. He contends that the Lovecraft mythos provides a framework for the generation of narratives that - unlike many RPG stories - hold up beyond the game-play session.

Kenneth Hite's thoughtful examination of the tensions between general horror literature, Lovecraft's oeuvre, and play structures in Chaosium's Call of Cthulhu role-playing game scenarios reveals a surprising amount of standardization, given the longevity of the series. The CoC rules, preferred play styles, and formalist tendencies of the published scenarios seem to work against opportunities for imaginative play that underpin traditional RPG formats. The Keeper's creativity appears to be restricted, and the players lack the motivation for long-term investment in Investigators who are, as Hite claims, "doomed to the same fate as the hapless narrators of 'The Call of Cthulhu' or At the Mountains of Madness." Instead, the drive for knowledge of the Cthulhu Mythos is the prime gaming factor, built into the cornerstone sanity rules and working in an authenticity-generating interplay with Lovecraft's own "ur-texts." I suggest that the standardization in Chaosium's publications and in particular in the play styles which Hite questions, while certainly attributable to the factors he mentions, is perhaps better understood as driven by the nuances of Lovecraft's unique brand of paranoia.

As Hite notes, Lovecraft's body of work develops from previous trends in a number of ways, especially with regard to the danger of learning forbidden knowledge. Forbidden knowledge undermines "reality," rendering the everyday world more fragile than previously supposed and therefore more vital. Forbidden knowledge in Lovecraft's stories does just this, outlining a pantheon of Great Old Ones lurking beneath the surface of everyday life so that odd or supposedly inconsequential everyday events are revealed as ominous clues to a coming or existing threat. This is classic paranoia, where everything is secretly connected for the purpose of some ill-intent. Although such knowledge is mentally destabilizing, the Lovecraft character who gains forbidden knowledge is also empowered by it; those without such knowledge are suddenly ignorant of greater truths. The allure of such life-altering knowledge is understandably imaginatively appealing to the early teens and college students whom Hite notes shape CoC styles of play. The paranoid balance between knowledge and sanity is so significant in Lovecraft's writing that mechanics similar to CoC's sanity rules stimulate play styles in many other game adaptations of Lovecraft's works, including Fantasy Flight Games' recent re-release of the board game Arkham Horror, Bethesda Softworks' computer game Call of Cthulhu: Dark Corners of the Earth, and a work from my own area of interest, Michael S. Gentry's interactive fiction Anchorhead.

In comparison to Lovecraft's influence on games, his major contribution to the horror genre, as Hite astutely states, is "thematic and mythic." The "Cthulhu Mythos" provides an extensive spatial and temporal framework which is not just a cosmic network of actors threatening life as we know it, but also an authenticated system, given original privilege by the "ur-texts" in Lovecraft's own narratives, such as the Necronomicon or The Witch-Cult in Western Europe. For readers, the significance of Lovecraft's authenticated Mythos derived originally from the ambivalent origins of these ur-texts; real works such as Margaret Murray's Witch-Cult were mentioned alongside imaginary tomes like the Necronomicon, giving early readers a sense that all of these books existed. Privileging the Mythos in this manner, giving it scholarly weight similar to that of a lost religion, is an effective narrative technique. I would argue that the standardization of both adventures and play styles in Chaosium's CoC RPG relates strongly to this need for privileged knowledge.

Hite describes Chaosium's remarkably large "adventure book 'footprint,'" noting both the financial and critical success of CoC published scenarios. The reason for this success is undoubtedly related to the factors Hite lists in his article, but perhaps there is more to it. If the notion of an authoritative Mythos is as central, as I claim, then Chaosium's published adventures might be successful precisely because they carry that authenticating value. For instance, the importance of the malevolent cosmic pantheon suggests why "Call of Cthulhu adventures more consistently follow the complex discovery plot structure than Lovecraft's stories do," as Hite notes. Chaosium adventures have not borrowed Lovecraft's primary plot structure, they have borrowed the plot structure which most fittingly allows the Mythos, more than anything else, to drive play. Hite implies that the CoC RPG takes a lateral step so that the ur-texts in Lovecraft's Cthulhu Mythos stories (the Necronomicon, The Witch-Cults, etc.) are replaced by Lovecraft's own weird stories as sources of authentic information in the RPG environment. If that is the case then the adventures which relate to those stories for evidence of the Mythos, such as the "pure remakes" and "sequels" Hite describes, would be valued as discovery plots with a more authentic edge than scenarios which do not reference Lovecraft's narratives directly. The potency of the Mythos requires authentic sources.

The value of authentic sources is particularly apparent for authors in the horror genre, where various horrifying agents and situations have been so repeatedly fictionalized that readers are no longer scared by them. Addressing this issue in a review of Michael S. Gentry's Lovecraft-inspired interactive fiction Anchorhead, Duncan Stevens argues that good horror writing for a game faces the twin challenges of building suspense and making the game "feel fresh" (Stevens 1999). Given the plethora of Lovecraft games, films and other media out there, this burden may reasonably be said to be heavier for a Keeper who wishes to host an imaginative, dramatically open game. As his focus is on published adventures, Hite does not discuss examples of open or solely Keeper generated CoC sessions, though he notes having led them. It would be interesting to discover what design or play issues come to the fore in such situations to determine if it is difficult to maintain a structure of suspense while still avoiding clichés that may detract from the experience. Interestingly, Keith Herber freely admits to using horror clichés as building blocks in constructing a CoC "Haunted House" scenario, though his emphasis on a structure of suspense and information so privileged as to make it impossible for Investigators to solve the mystery may render the clichés inconsequential (Herber 2007, 43). It may be that the difficulty in constructing a Lovecraft scenario lies not in avoiding familiar game or narrative mechanics, but in making the revelations as morbidly unnatural as possible - a difficult creative feat. Perhaps Dagon is in the details.

The importance of privileged knowledge affects play styles as well. One of the most interesting points Hite makes is that play styles in CoC have been standardized both by Chaosium and by the players themselves so that the overreaching madman fate is forced onto players by the game rules and the complex discovery plot is predominant in the adventures. Hite considers the prominence of Lovecraft's narrative formulas in game play but offers little examination of Lovecraft's characters. Admittedly, this is an understandable oversight. S. T. Joshi argues that "characterization was not important to Lovecraft because it would not serve his fictional goal; the depiction of the vastness of the cosmos and the inconsequence of humanity within it" (Joshi 2003, 63). Despite Lovecraft's ironic downplay of the very thing that is threatened by the malevolent Great Old Ones of the cosmos, Joshi's comment reveals why character is not important in CoC. Lovecraft's characters are ciphers - obsessed, sensitive, tortured and even complex ciphers, to be sure, but ciphers nonetheless who are secondary to paranoid networks of evil beings hovering in a nearby dimension. Perhaps the disinclination that players have to experiment with "variant character groups or settings," or to adopt a "'Raid on Innsmouth'-style multiple-character" model stems from the lack of interest in switching from one cipher to another. In a game where revelation of the forbidden knowledge is paramount, player character traits - cherished and nurtured in other RPGs - hold little long-term attraction beyond what they contribute to discovering the forbidden knowledge. I admit that this point is debatable since players have individual reasons for playing an RPG, but if all Investigators exhibit an ability to ascertain the Mythos there is little overt mechanical value to be gained from character switching.

Investigators' inherent ability to apprehend the Mythos is a ludic trait which might best be compared to Lovecraft's conception of cosmic sensitivity. In his essay "Supernatural Horror in Literature," Lovecraft writes that the measure of weird tales such as his own comes not from creating fear or dread in a reader but rather in exciting "a subtle attitude of awed listening, as if for the beating of black wings or the scratching of outside shapes and entities on the known universe's utmost rim" (Lovecraft 1935, 427). Noël Carroll argues that the awe Lovecraft describes in this passage is akin to religious feeling: "[f]ear itself is distasteful and would naturally be avoided; but cosmic fear is not simply fear, but awe, fear compounded with some sort of visionary dimension which is said to be keenly felt and vital" (Carroll 1990, 163). Carroll is eventually critical of Lovecraft's conception of cosmic fear but that is because he is concerned with how those ideas apply to the horror genre. Within his own fiction there can be little doubt that Lovecraft strove to inspire such awe or cosmic fear in his readers by producing the effect in his characters. Developing that sort of sublime apprehension of unknown things in the universe requires a systematic Mythos created with authority, such as is represented by Lovecraft's own series of works or Chaosium's series of printed adventures. Further, such a Mythos would need to be privileged, ancient, and free from the tedious taint of the familiar copy, making the thematic reliance on Lovecraft's own work primary and lending authority to traditional play styles. In short, character and open-ended play styles have been made insignificant in CoC because they are secondary to the importance of the Mythos. That said, whether the Mythos' central position in CoC is due to Chaosium, adventure authors, player styles, or some combination of the three is another question altogether.

Carroll, Nöel. (1990). The Philosophy of Horror or Paradoxes of the Heart. London: Routledge.

Van Leavenworth. “Playing with the Mythos”, Electronic Book Review, December 25, 2007, Leavenworth, Van.
Readers wishing to respond to an essay in ebr may send ripostes or short glosses to the journal’s Managing Editor, Will Luers.
PDF
This essay was peer-reviewed.

Schizophrenia and Narrative in Artificial Agents 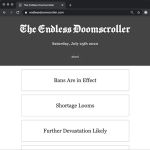 On Reading and Being Read in the Pandemic: Software, Interface, and The Endless Doomscroller