atom one, the troubadours

Or, at least, that's the CLAIM that every scholar who writes about the 12th century explosion of song writing in southern France at first repeats...... then backs off of.

"It's probably not EXACTLY true," they'll waffle... "but it's close enough for Jazz."

What IS unquestionable is that every theme of every love song being played on the radio at the moment you read this - country, rock, standards, hip hop, dance, in every Western language - can first be found in troubadour lyrics...

- My beloved doesn't love me and I'm going crazy with grief

- I know that loving you is against all the rules, but our feelings are more important than anything else

- One glance from you would magically cure this horrible pain

- Spring time is the season of love

- Drop your resistance, and be with me even though it seems against common sense, there are higher principles at work

- It's my job to praise your unique worth in song lyrics

- I'm the best of all the songwriters (the others are clowns and pretenders), I can handle a sword as well, so therefore I'm the best candidate for your love

These themes are so deep a part of our culture that it is a shock to think of a time when they were brand new...or to know that they are not shared by all the great cultures of the world.

So, while the troubadours have been on my mind (as they are every Spring)[I love Valerie] I have also been thinking about Cyrano de Bergerac, that minor poet with the big schnozz who was immortalized and fictionalized and Romanticized in Rostand's smash hit 19th century play. And I was reflecting on just how cool Cyrano is - swordsman, poet, impromptu rhymer, lover - just how perfect a descendent of the troubadours he is...his SKILL WITH WORDS proving the depth of his love...his courage to fight, his courage to know his emotions...his tragedy as he hides behind the shallow, handsome front man...how, generation after generation, we in the Western (troubadour-laced) tradition will always find the figure of Cyrano cool...then...

...I had a revelation, and I am here to officially record my PREDICTION.

They compete for love (love from the beloved in the song, love from the audience) on the basis of their skill at memorized and spontaneous rhyming.

Most of them do work of poor quality, a tiny percentage does work of great skill.

The "literary experts" of their own time do not recognize what they do as literature.

They brag about their skill in their lyrics, troubadour style, and openly attack their rivals.

Many are surrounded with an aura of readiness-to-fight, of attitude and weaponry, some have even been in ambushes or duels. Just like Rostand's Cyrano. Some have died that way. Think of THAT.

Think how THAT will look in 300 years, 700 years. How incredibly romantic.

Hip Hop culture has its particular kinds of clothing, particular vocabularies, even particular body language, carefully archived on film and video...all built around the principle that verbal and musical skill demonstrate personal worth and lead to worldly rewards.

Because of Hip Hop's sheer popularity, enough evidence of it will survive for young fans of the future to be able to fairly accurately re-create a Neo-Hip-Hop culture...which will operate just like the various waves of Neo-Classicism throughout Western history. Yes, tattoo it in SKIN, some Rostand of many centuries hence will fictionalize up some story of men and women who are ALIVE RIGHT NOW (or have recently died) and a whole generation of future swooning young folks will go to sleep every night in their Neo-Nikes and Neo-Soccer-Jerseys (long after soccer will have ceased to be played) under their animated Tupac Shakur holograms WISHING LIKE HELL that they had been LUCKY enough to be alive in the 1990s when True Hip Hop Troubadours roamed the earth.

. “Tattoo it in Skin: A Literary Prediction”, Electronic Book Review, September 1, 2001, .
Readers wishing to respond to an essay in ebr may send ripostes or short glosses to the journal’s Managing Editor, Will Luers.
PDF 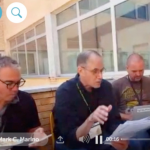 Monstrous Weathered: Experiences from the Telling and Retelling of a Netprov