Diana Lobb responds to Katherine Hayles and ponders the ambiguities of dialogue.

The Cheshire cat is a particularly apt metaphor for the elusive prize that in Paul Gilory's Against Race, at least, is called pragmatic planetary humanism: the recognition that fundamental corporeal fragility can serve to promote a sense of heterogeneous species unity. The nature of the cat is ambiguous. It is neither friend nor foe but possibly both, or neither, or something else altogether. The cat never communicates meaning directly; only ever speaking in riddles and puns. The cat is always and never a tangible presence: just at the moment when it appears to be most vulnerable to capture, it vanishes leaving behind only a fragment of itself to remind us it was ever there at all. While the Cheshire cat has survived the passage of over a century, it has only done so by proving itself to be both mutable and fluid: passing from Carroll's "original" through Disney's saccharine-ization and into American McGee's bent and starving monstrosity (and more than a few other places in-between). It is not unreasonable to suggest that this phantasmagorial feline forms a semi-stable node in Western cultural discourse which a tapestry of meanings has been woven through and around. The unexpected, and unpredictable patterns and directions that its interpretation makes and takes is not unlike the iterative process through which the prize of global human equality has been defined and redefined, dreamt and re-dreamt.

The appeal of writing a book review for one of ebr 's thREADs is that it affords the opportunity to consciously and actively take part in the "Weave"-ing of a discussion. The element of active dialogue that has been built into the structure of this on-line publication affords an opportunity for many voices and opinions to interact through and around the node of interest. At the moment I am writing this addendum, Hayles' and my contributions to this thREAD constitute a warp and a weft. However, as other hands and voices join the weaving process we may lose those privileged positions and become incorporated in others' patterns and designs, we may even be relegated to the fringes of the tapestry of meaning that is being created. And frankly, where Hayles' and I end up the emerging conversation is less important than the plurality of opinions and diversity of interpretations that interconnect in and around the issue of how the academy can, or even should, envision a just and equitable political society. If I was inclined to use an organic metaphor for the intellectual community, I might be tempted at this point to gesture to Stuart A. Kauffman's hypothesis of self-organisation in co-evolving systems and the importance of maintaining a "next-to-chaos" state to maximise both the adaptability and evolutionary potential of a system. However, Simon Gikandi's words on the importance of the kind of open intellectual discussion ebr makes possible, and the perils of its absence, are much more eloquent than anything I could write, and so I provide them here:

It is important to call attention to the nature of critique as a function informed by disagreement because one of the things I have found most distressing in the way intellectual discourse has been organized (sic) and carried out in the last few years is its return to something akin to medieval guilds, a situation where ideas derive their authority from their conformity to the most fashionable terms, to networks of professional connections and friendships without consideration for their merit. Those who sanction such ideals of conformity would be well advised to remember Chinua Achebe's caution, in The Anthills of the Savannah, that if the gendarine swines had disagreed among themselves, some of them might have been saved. (150)

Rather than attempt to gloss Gikandi's observations, I'll leave it to others to weave what they will through and around questions of the role and nature of intellectual debate.

However, before my turn at this thREAD's loom is complete, there is an important point that has been obscured by Hayles' rush to defend her "theory." To bring that point back to the fore, I must, for a moment, return to Lewis Carroll's Wonderland texts and call attention to the figure of the looking-glass. In Carroll's writings, the looking-glass functions simultaneously as a barrier and a portal between the world of the nineteenth century English sitting-room and the world of Looking-glass House in Wonderland. Alice is able to move between worlds by not only looking through the looking-glass but by also observing how the looking-glass produces and re-produces the image of the sitting-room: what the looking-glass "faithfully" reflects and what it distorts, what the looking-glass makes visible and what it obscures. The glass that separates the sitting room and Looking-glass House is not unlike a glass fishbowl that separates and protects the environment of a goldfish. As Toni Morrison observes in her seminal essay "Black Matters," the goldfish bowl is "the structure that transparently (and invisibly) permits the ordered life it contains to exist in the larger world" (17). Attempting to understand the structure that orders, contains and constrains is, Morrison rather persuasively argues, as important in understanding the activity that takes place inside that structure as is direct observation of the activity itself. This brings me back to the point of my review, a point that needs to be brought back to the fore: there is a price to be paid for overlooking how methodological choices inflect the content of an argument and it is long past time to consider exactly who is being made to pay that price. As I argued in my review, as responsible academics we must stop trying to pretend we can uncover some sort of redemptive Truth of the Human (or even the post-Human) and instead start trying to focus our attention on the connections between discourses that continue to structure both the idea of `race' and the racisms that distort, efface and limit our ability to approach to an understanding of heterogeneous species unity.

I hope that some of this methodological questioning will be picked up by the other voices that choose to participate in this conversation. If we're very lucky, perhaps, in the tapestry we are creating, we will be able to catch a glimpse of something more than just the Cheshire cat's grin.

. “The Cheshire Cat’s Grin”, Electronic Book Review, December 6, 2004, .
Readers wishing to respond to an essay in ebr may send ripostes or short glosses to the journal’s Managing Editor, Will Luers.
PDF

other essays by 222
Diana Lobb 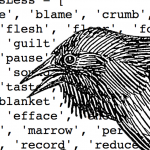