David Rothenberg writes of the affective and effective power of reverb.

"Turn up the reverb, man." That's what the singer up on stage says to the soundman at the mixer at the back of the hall during the sound check. He's like all the rest of us: He likes the way his voice sounds in the shower better than it does in the dry room of reality. He wants that bathroom echo, that sound that fills his ears as it bounces off the tiles. What he really wants, though he may not know it, is the echo you hear in caverns and cathedrals, that massive reverberation which makes sound seem to be more than what it is, which actually turns sound into space. Reverb makes the music last. And are we not the music while the music lasts?

Reverb is a phenomenological effect. It works directly at the level of the senses, affecting us before we can analyze it and decide what is happening. Reverb is something that happens right between the performer and the listener. As Edmund Husserl, the founder of phenomenology, pointed out in Lectures on The Phenomenology of Inner Time-Consciousness (1928), once a sound happens, it immediately goes away; and the moment it's over, we begin to forget it. That's what memory, in fact, is: the history of forgetting. But listen to the extended instrumental intro to the Temptations' "Papa Was a Rolling Stone"; listen to the reverb. Don't you hear something strangely, well, rolling about the sound of the strings? It rises up, swells, and fades away, just like that stone travelling through the days. The sound may come from this world, but it goes right out of this world. It's strange and familiar at the same time; and, years later, we can't get it out of our heads.

Acousticians have written reams about "the perfect acoustic space," and the engineers of sonic enhancement toys have worked tirelessly to simulate such spaces, but nobody ever asks why we are so drawn to these simulacra. Maybe Tom Waits has the answer, on Frank's Wild Years: "Today's gray skies, tomorrow is tears. / You'll have to wait 'til yesterday is here." You say you prefer the past to the present and the future, because it's safely over, because it will never come? Keep waiting. Although there is no way ever truly to recover a sound that was, reverb meets us half-way. It keeps the sound alive. It makes the sound fill the space around us - whether that "space" is an ampitheater or a stairwell, or the imaginary space of dreams and machines - until we're living in it.

Music never belongs entirely to the artist, particularly so when it's played in a room with great acoustics. The practice rooms in the music building of the college I attended had such dead acoustics that everything played sounded terrible, like mud. Some of us were inspired to play for hours and hours, until something sounded halfway decent; most of us quit forever. But on the stage of the auditorium upstairs, everything sounded beautiful. Even the most unpracticed ensemble would benefit from the sonic ambience of that space. The building seemed to be paying an endless compliment to those who performed inside it; the building, in fact, was playing along.

There are those who've argued that without the long echoes inside the great cathedral at Piazza San Marco in Venice, polyphonic music would never have come into being. The monotones of Gregorian chant began to pile up on top of themselves; they expanded out of the fourth dimension (time) into the other three (space). The sound of voices overlapping literally filled up the cathedral, suggesting the possibility of a music based not on melody, but on harmony. Today, surrounded by music issuing from car speakers, the ceilings of stores, and the neighbors downstairs, many people long for the austere reverberations of polyphonic chant. Thanks to modern technology, they can have it!

Reverb doesn't only happen live. It's a complex series of echoes, which come at the listener from all sides, bouncing off different materials, rebounding at different angles. And that's exactly why it's so easy to reproduce electronically: simulating these kinds of differences, processing them, and generating endless variations of them are what computers do best. Nothing beats seeing someone like Jimi Hendrix play live, hearing him discover life in outer space as the distorted wash of his guitar recedes into eternal distances all around you, but have you ever listened to those European jazz recordings on ECM from the '70s? Keith Jarrett's piano, close-miked and crystalline at the Köln Concert, shimmers in space. Each separate instrument of Ralph Towner's and Jan Garbarek's chamber jazz is clearly audible: saxophone, twelve-string, drums, bass. These don't naturally mix, but here they create a sound which will linger forever in the open caverns of memory. The listener is drawn into an imaginary room - a room in which nobody coughs or shuffles, and in which every seat is the best seat in the house - and scattered to its far reaches. These musicians will never perform together again, but that's fine: the record is this music's true form.

Just a generation ago it cost thousands of dollars to create the illusion that the sound coming at you through those beer-stained Marshall speakers coated in blue glitter foam was actually recorded in the proscenium of a Roman ampitheater. Today, by buying an effects box that costs a hundred bucks, we can re-create the specific echoing quality of tunnels and caverns, concert halls empty and full, bathrooms large and small, and - if you could actually hear sound in outer space - the music of the spheres. Today's 32-bit digital reverb processors, with all parameters up for adjustment - from decay time to early reflection amount and delay, to high roll-off and low roll-off, sound better than any church or concert hall - less noisy, uneven, muddy, and muffled.

Sound effects are just effects, of course, not real aesthetic innovations. Authenticity is always noisy, uneven, muddy, and muffled. But reverb is more than the simple mechanical reproduction of something that is unique and singular out there, in some separate real world. Using electronic reverb tools, we can begin to play with the very notion of authenticity. Don't think of reverb as a drug that trips up your synapses, but as a tool that can teach us how to hear better, to hear more - much more. Reverb can sensitize us to the echoes of the wind in the trees; to the sound of waves crashing to our left, to our right, and in front of us. We humans can bear only so much reality; we get cold and bored and tired out there in the wild din of noise. Maybe sonic illusion can help reveal the magic that makes listening possible at all.

. “The Phenomenology of Reverb”, Electronic Book Review, December 23, 2006, .
Readers wishing to respond to an essay in ebr may send ripostes or short glosses to the journal’s Managing Editor, Will Luers.
PDF

‘I am a Recording Angel’: Jack Kerouac’s Visions of Cody and the Recording Process 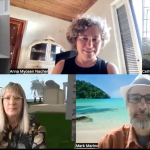