Gene Kannenberg, Jr. finds the most well-publicized comic by one of America's most significant cartoonists to be technically accomplished, challenging as narrative but finally all too true to its title: the characters and situations in David Boring are in fact boring.

Daniel Clowes stands without a doubt as one of the most significant American cartoonists to emerge from the alternative comics ghetto in the past two decades. Graduating from early science-fiction and genre material like Lloyd Llewellyn to the more all-encompassing world of his pictorial potpourri Eightball (all published by the Seattle-based comics publisher Fantagraphics Books, Clowes has demonstrated a knack for narrative sophistication and character development - not to mention a keen and often devastating wit. These traits have garnered his work critical acclaim and some amount of commercial success, including the recent feature motion-picture version of his graphic novel Ghost World.

David Boring, Clowes's most recent long-form comics project, was initially serialized in three issues of his comics series Eightball, but its hardcover publication by Pantheon Books has broadened its potential audience from comics-shop devotees to casual bookstore browsers. The book's slick design work (and its puff quotes from mainstream media mavens Time and Newsweek) may help entice non-comics-readers into picking up a copy. And this action, as comics aficionados and cartoonists agree, would be A Good Thing; the more that general readers are exposed to comics, the more that the dreaded "Comics Aren't Just for Kids" review headline would be banished to the trash heap of Obvious Observations.

Upon reading the book, though, one cannot help but think that David Boring, for all of Clowes's undeniable skills, is not entirely suited to this role of Comics Ambassador to the General Reading Public. It is a work of careful craft and sophisticated storytelling, true, but it does not engage on any emotional level. While it does not pander to unrefined juvenile tastes, neither does it reward readers looking for anything more than cleverly structured escapism. Such might be enough to ask of less experienced storytellers. But the context in which David Boring comes to us - given Clowes's own growth as a visual storyteller, as well as the book's presence in the mainstream bookstore marketplace, long jaded in its reaction to comics narratives - is an important factor in gauging its accomplishments. Overall it suffers from an air of inconsequence; the plot and characters play themselves out according to a carefully established pattern, but that pattern in turn reveals little beyond the inherent shallowness of the main character. While not entirely boring, Boring also does not excite.

Loosely put, the plot concerns the romantic trials of our self-styled "eponymous narrator" (2), particularly the soulless, clinically passionless quest of his feminine ideal. Along the way, there are mysterious deaths, mistaken identities, coincidentally overlapping quests, and the possibility of war just over the horizon. Such ingredients can be the stuff of excitement (if not High Art), but Clowes consciously works to frustrate dramatic impulses at every turn. Boring's own narration marks time for us, describing the events of his own life like a movie even he does not enjoy; his emotional distance from himself at first invites our pity, but eventually it simply distances our own emotions.

The references to film are pervasive. Clowes conceived and executed David Boring while his Ghost World movie was in the early stages of development; and this fact surely has some connection to the book's preponderance of cinematic references and stylistic quirks. The book itself is divided into not three chapters but three "acts"; faux lobby cards depicting possible upcoming scenes from the narrative are presented between chapters two and three; and the characters are listed in an "end credit sequence" after the book's final panel (upon which is superimposed "The End"). And Boring's own narration draws countless cinematic parallels between events and his interpretation of them: "I love that I'm talking about 'blondes' and 'alibis'" he notes with reference to film noir conventions when, early on, he obsessively follows the latest personification of his feminine ideal, Wanda Krankl (16).

Thankfully, David Boring ultimately is not an attempt to reproduce a cinematic experience in comics form. Such an exercise would inevitably prove futile, just as those comic-book films that wear their source material formally on their sleeves never adequately reproduce a so-called "comic book feel"; the differences of media and the problems of adaptation mitigate against such easy overlapping of narrative forms. And Clowes is too canny, too accomplished a cartoonist to make such a mistake. But the cinematic references call attention to themselves in obvious ways, and they contribute not only to the suspicion that Clowes sees film narratives as fussily involved with superficiality, but also to the fact that the story we're reading falls into a similar trap, one whose dangers are spelled out for us.

But film is not the only medium which is invoked; Clowes foregrounds as well the comics form - and its cultural avatar, the adolescent's comic book. Boring's father, we learn, had been a cartoonist, and a tattered copy of one of his father's works, The Yellow Streak, is his only link to his memory. The back of the dust jacket is made of a montage of Yellow Streak images, its low-culture origins tagged via the use of "big dot color separations" by John Kuramoto, a technique also replicated throughout the narrative whenever comics panels are replicated. Foregrounding the means of color reproduction like this draws immediate distinctions between comics as part of the mise en page and the comics narrative we as readers are following; at times Clowes blurs the effect by including a decontextualized Yellow Streak panel as part of the page breakdown of the main narrative, blending David's life with his father's created narrative. This technique effectively draws thematic parallels, but those parallels are themselves usually of an obvious nature. The technique is clever, but its use is pedestrian.

There are other, more intriguing comics storytelling techniques on display, though. Clowes "freezes time" in his panels in a way that few other cartoonists can manage. Part of the potential elegance of comics narratives lies in the selection of just which moment in time to depict for each action presented, and from which perspective. Clowes chooses unconventional (although not incomprehensible) moments to illustrate. A head-on shot of a bullet in flight suddenly draws the audience into the story at one of its more dramatic moments (the end of Act One). And the awkwardly posed fight sequences (yes, there are a few punches thrown) reveal not an unskilled artist but rather unskilled pugilists and the way in which physical confrontations generally do not stand as exemplars of balletic beauty and grace. These and similar small moments reveal that Clowes does in fact have remarkable storytelling skills.

Unfortunately, these narrative practices serve an underwhelming story. Clowes's Ghost World, for all its episodic, decentered narrative nature, nevertheless presented characters we could care about. The slow, circling rhythm of its narrative (initially serialized in several short vignettes) reflected life as it is experienced - not a highly structured plot, but quotidian events whose significance is revealed through reflection. This is not to say that a rewarding narrative cannot have a tight plot, but in Ghost World's case, the looseness of the plot reflected the loose, live-for-the-moment joie de vivre that initially characterized the lives of Enid and Rebecca. At the same time, narrated events served to create depth and resonance in the characters. Ghost World's signal virtue is its celebration of character, its realization that quirks and flaws tempered with change and growth are precious qualities to be cherished.

In David Boring, by contrast, plot is paramount. Boring himself is, well, not very exciting. Which in and of itself is no flaw; dynamism is not on call here. However, emotional appeal is, and there is precious little about David Boring that appeals. Boring's father-quest as a character-defining trait is trite, even for comic books (this realm has been mined to death by even mainstream comics authors like J.M. DeMatteis). Boring's other defining trait is his sexual desire, a numbing fascination with body types which ultimately reveals its source in a clandestine childhood encounter with his cousin Pamela. The fact that David and Pamela's relationship resumes near the end of the story merely reinforces that his obsessions have served him well - Boring's string of soulless encounters has not been merely an empty, joyless exercise, we are led to believe; rather, he was indeed seeking to regain a lost love, a quest which is revealed to be not a futile childish longing at all. This joyful reunion in the face of disasters large and small seems more tritely structured than the tidy cinematic plots to which David has compared every facet of his life.

As the book ends, Boring has found at least a semblance of happiness, though he acknowledges that his bliss may be short-lived (as all of his emotions generally have been). The phantom war which has skirted the story seems as if it may in fact become a reality after all; Boring refers to it, in characteristically cinematic fashion, as a falling curtain (116). That its ambiguous nature remains unresolved, however, frustrates more than it suggests. The same might be said for David Boring as a whole. The story is made manifest through suggestion, not assertion. This strategy could be - and has been, in Clowes's hands - a sophisticated strategy for the development of character and theme. In David Boring, however, Clowes seems more interested in form for its own sake, suggesting little beyond its own self-awareness. Clowes's techniques remain careful and clever; we can hope that his future works will again explore both the surface and the depths of experience.

. “What Lies Beneath?”, Electronic Book Review, October 1, 2001, .
Readers wishing to respond to an essay in ebr may send ripostes or short glosses to the journal’s Managing Editor, Will Luers.
PDF

Perloff in the Nineties

The Importance of Being Narratological 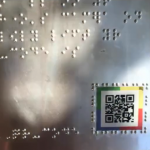