Recalling ebr's early exploration into "green" and "grey" ecologies, invisible etchings on silicon and massive environmental consequences, Ben Bishop calls our attention to questions of "power" at the heart of our newly digitized critical and creative practices: "Not clout or capability, but electrical power generated by spinning turbines."

From the sociological standpoint of collective behavior, there's a crucial junction that every successful movement or group comes to in its lifetime: what do we (the movement or group) do to meet our goal? From this perspective, there are two choices: assimilate into the institution in which you are trying to affect change, or fade into oblivion knowing that the goal--whatever it was-- was completed. When looking forward to the future of ELO, it makes the most sense to me that the organization moves to become sutured into the institution of literary and media studies. While the organization is definitely (not) limited to these institutions, we do need to think about questions of scope - about what goals are important to ELO as an academic audience begins to adopt some of these works of art, thought, and critique. With the sheer number and variety of works of electronic literature that emerge on a daily basis, (and remain, forever burned into laser etched disks on servers all across the globe) at some point, the ELO risks collapsing under its own weight. On the heels of a successful conference and in a time where the community is reaching out with renewed vigor, the impact of answering, or not answering, this question becomes more pressing. So who is going to be left holding the bag, and what will be left of the bag? I have no clue; I'm just here to advance my own goals as an artist and cause some trouble along the way.

Trouble, like problematizing a particular aspect of e-lit scholarship. Or rather, lack of scholarship. This aspect: power. Not clout or capability or politics, but electrical power generated by spinning turbines. For example, on the February 11 2009, Call of Duty: Modern Warfare 2 was released. Over 5 million hours of multiplayer were logged on XBOX Live-- and that sum does not include those just playing single player, or any players on the PS3 or PC platform. (Follow the above link for some estimates on usage on PS3 and PC, and for figures that estimate the wattage for each of these platforms). Peak power draw, determined by the above linked estimates with over 3 million concurrent users on their XBOX360s and televisions, is over 1 gigawatt. To gain a reference point on what is needed to generate that much power, the most recently activated and modern nuclear power plant is the Watts Bar plant that began construction in 1973. This reactor in Spring City, Tennessee has a “net capability” of 1.109 gigawatts. Being a part of this online chaos, and aiming for the 25-straight-kills-and-no-deaths "killstreak" to attain the match ending nuclear missile strike, I was oblivious to the fact that I was contributing (so-to-speak) to an environmental nuclear event of my own. Given this realization, how will all that wattage affect my presonal valuation of gaming time? How does it affect my energy bill? What cost, to me and to the ecosystem, of those hours perusing or creating works of electronic literature on my large LCD monitor and power hungry video card?

Nonetheless, MPG and Energy Star Certifications reign supreme in American consumer choices. With heated discussions on the need for alternative and renewable energy sources happening all over the globe, leaving this factor out of our scholarship is irresponsible, at best, and detrimental, at worst. Who knows, after doing some research, you may never own another power hungry x86 architecture based desktop computer again. Or maybe you will, but either way, in a field where we can count everything - our energy usage is one critical aspect that we in the e-lit field cannot afford to be ignore any longer.

Ben Bishop is a gamer, e-poet, computer technician, and new media scholar, with an MFA in poetry from West Virginia University.

Bishop, Ben. “Who’s Left Holding the (Electrical) Bag? A Look to See What We’ve Missed”, Electronic Book Review, March 1, 2014, .
Readers wishing to respond to an essay in ebr may send ripostes or short glosses to the journal’s Managing Editor, Will Luers.
PDF
This essay was peer-reviewed. 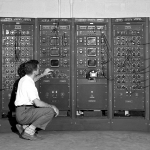 The Code is not the Text (Unless It Is the Text)

The World is Flat