A gloss to The Latest Word

For an essay that situates Curtis White’s The Middle Mind in the context of recent debates about the role of difficulty in aesthetics, see Rone Shavers’ “The End of Agapē: On Debates around Gaddis” in Paper Empire: William Gaddis and the World System. (Ed. Joseph Tabbi and Rone Shavers.) 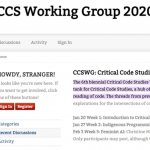