In response to last month’s review of Chris Kraus’ After Kathy Acker (2017), we welcome a riPOSTe by Daniel Schulz, who is currently working as part of the University of Cologne’s Kathy Acker archive. Schulz’s response to reviewer Ralph Clare explores the dynamic between Acker’s personal life and politics.

ebr was delighted to hear from Daniel Schulz, at the University of Cologne, Germany, who informed us that the University is constructing a Kathy Acker archive gifted by Matias Viegener in 2015, containing “the handwritings, 47 letters, and other sources found in the 6054 books, magazines, and other papers of Kathy Acker’s personal library” as well as a further “six donations, and five specific audiotape recordings, excluding the music collection contained within the Reading Room.”

Working within this considerable collection, and as someone who has studied the life and work of Acker closely, Schulz makes many observations in his riPOSTe of Chris Kraus’ literary biography of Acker, namely claiming that Acker’s personal relationships, upon which Kraus’ text arguably focuses, are more intrinsically tied to her politics than Kraus lets on. While in many ways Acker’s personal life in general was driven by her personal politics, it should also be said that Kraus’ literary treatment of Acker’s life has the task of weaving together just these two of many variables, and rhetorical choices had to be made.

What Schulz offers, then, is rich context to add to aspects of Kraus’ text through archival inquiry: he draws from original handwritings to note, for instance, the influence of Charles Olsen on a young Acker.

Ultimately, Schulz notes that Kraus’ literary representation of Acker’s life can encourage even further inquiry and research, perhaps in the same comparative method that Schulz takes to compare personal story with personal document. In the same spirit, I must note that document and archive are ultimately imperfect forms to understand someone like Kathy Acker, whose life force is clearly still on the move. As I had said last month, Acker wouldn’t be silenced, and even in death she generates conversation.

Jane Bennett’s Vibrant Matter participates in the fields of new materilaism and object-oriented ontology, being relevant to studies of objects in a way that is differentiated from posthumanist studies: it is decidedly non-human, by which I refer to the decentralization of the human subject as an origin point of comparative inquiry.

In thinking through Bennett’s contributions to how we can examine things, thinghood, and new materialism in language and literature, Dale Enggass attempts to expand posthumanist modes of reading towards attention to the details of objects and things in themselves and in collection—a new materialist perspective that draws upon Deleuze and Guattari’s assemblage to consider combinations of things.

In the first half of Enggass’ essay, “Vibrant Wreckage,” he explores Herman Melville’s Moby-Dick for the figure of the whale, through which human language meets a limit: in its incredible vastness, whiteness, and power, the whale eludes the narrator Ishmael’s comprehension, let alone linguistic description. While this thematic ineffability has been cause for Melville to be described as a transcendentalist, Enggass uses Bennett to focus not on the sublimity of the whale, but rather, on the closeness and minuteness of its details offered in the text. In this way, the fragmented focus on the whale’s parts—for instance, on its tail— becomes a materialist study that, befitting the story and the decentralization of the human subject, is still not enough to comprehend, to “know” the whale.

The second half of Enggass’ essay examines Pamela Lu’s Ambient Parking Lot (2011), a novel on material waste in an industrial metropolis, where hyperconsumption results in attitudes of “antimateriality”—or, the short life cycle of material goods. Enggass draws upon Bennett to analyze the decidedly human-centric responses to machines, especially through the example of the Parkers (“park” here as in parking lot), a group of underground musicians who watch an experimental dance performance depicting the slow death of a woman trapped in a twisted car wreck. Here, the inanimate car itself plays a role in the performance to create a “live presence” that alienates the audience members into a complicated relationship that blends human and machine. 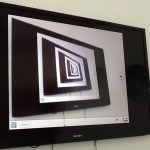