Chris Crawford adduces the algorithms of games against dramatic conventions.

I would agree with Aarseth's recommendation that we pursue simulation -- if we expand the notion of simulation somewhat. Traditionally, simulation has been gauged by its technical accuracy. For the purposes of entertainment, we need to expand the notion of accuracy to include the expectations and thought processes of our audience. I sometimes use the phrase dramatic laws of physics to express this notion. Just as a flight simulator must be true to the laws of physics, so too must an entertainment product be true to the laws of drama. For example, most games use spatial algorithms that correspond to geometric laws but violate dramatic laws. Characters cannot travel from point A to point B without traversing all the terrain between those two points, no matter how boring that terrain might be. In drama, a character who must travel between two points simply disappears from one location (stage) and reappears at the other. This conforms to dramatic standards, but completely defies all conventions of what we normally think of as simulation.

. “Chris Crawford’s response (excerpt)”, Electronic Book Review, May 21, 2004, .
Readers wishing to respond to an essay in ebr may send ripostes or short glosses to the journal’s Managing Editor, Will Luers.
PDF

other essays by 222
Chris Crawford 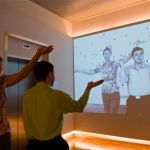