This fiction mimics computers and new media: its pages, which comprise a rape narrative, look like data and hypertext unscrolling on a computer screen. It's an interesting work published last year by FC2, whose list is known for both very strong work (Cris Mazza's Is It Sexual Harassment Yet?), and for other books that have the indulgent residue of college workshops all over them (D.N. Stuefloten's Mexico Trilogy). But while Re.La.Vir's form may be exciting for some folks in the messy, defiant world of experimental writing, and while it contains some devastating passages amidst its pages of feverishly scrolling computer lexicon, the work as a whole still evades me.

The book (whose title comes from its terminal-mimicking wordplay) is at times reminiscent of Sue Coe's work, but its pitch is even more uncomfortable. The description of a rape/torture incident and its aftermath, from the woman's point of view, contains some of the strongest, most difficult lines I've read, and the narrative's presentation in fragmented, fractured bits makes that intensity even stronger. With the horrific, unflinching tones of someone writing from the absolute bottom of hell, author Jan Ramjerdi (who teaches at U Cal-Northridge) builds Re.La.Vir's first segment with insomnia-producing phrases from the narrator's memory of the rape such as "die, you little red cunt," and "No one can hear you, make all the noise you want, bitch," and also, a sentence that's nightmarishly and affectingly repeated and reworked into a plethora of anagrams and spelling fragments, "I don't know the woman I am until I am raped."

That said, these hypertextlike pages become trying after many of them have gone by because of the volume of repetition; the reader would get the gist in half the book's length. Since the rape material sounds traumatized and genuine, it must be read with discomfort and horror and cannot be dismissed; so, as in many fictive projects about illness or catastrophe, the subject matter here automatically ensures the reader's sympathy, also causing negative critique to appear mean-spirited. So like a slick tarp, Re.La.Vir's savage subject matter works to repel criticism.

I'm not a huge fan of typography experiments in fiction, so while reading, I heard myself asking, "Why this form?" Some might read Ramjerdi's choice as a suggestion that human experience is at odds with technology's purportedly aloof, nonhuman qualities, or that a woman's rape is like the new technology's quick, omnivorous domination of the globe. But that would be a gross mistake. It's most likely that Ramjerdi is noting a parallel between the language of terminals and the various forms of human woe, or considering that rapid-fire computer communication replicates the hyperlucid thoughts inside a traumatized psyche. She also may be suggesting, as has Donna Haraway, that women are today in an especially interesting, ripe position to merge with technology.

I don't see this book as a good book to read, but, like works by Kenneth Goldsmith, a book to think about, a disturbing object, brave with its swarming embrace of an almost prohibitively difficult topic. But Ramjerdi's fragmenting, remolded language is not that innovative, and sometimes, despite the horror of the narrative, rings with cliche: "the woman was NARRaped, [ALT.REAL::REAL.E.PISTOL::]."

After over 100 pages of such language, I'm still unconvinced that it was imperative (or cool?) for the author to deliver her narrative in pretend-computer clothes. At moments, true, the form renders the text eerily airless, and the book's speaker is as ghostly a non-entity as a rape victim, making for some worthwhile textual moments. But Ramjerdi's wordplay (i.e., "No. No. [Novel not to die," etc.) at last suggests that she sees language as essential and definitive, the final sour realization in what is an ambitious but not engaging experiment.

. “No. No. [Novel not to die”, Electronic Book Review, December 30, 2000, .
Readers wishing to respond to an essay in ebr may send ripostes or short glosses to the journal’s Managing Editor, Will Luers.
PDF

other essays by
Stacey Levine 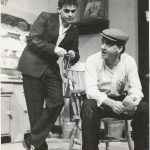 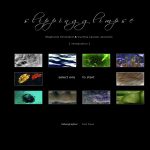 Iteration, you see: Floating Text and Chaotic Reading/Viewing in slippingglimpse 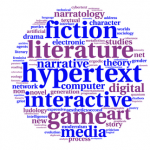 Visualising Networks of Electronic Literature: Dissertations and the Creative Works They Cite 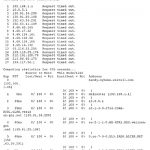