There is nothing to do but go on.
-a room of one's own

I am a white woman and I teach a black man and I know that he is an african american man and I have read many books by afro-american authors and I have learned many lessons concerning afro-american politics and I am horrified by rwanda and somalia flashing starving death baby heads and riots of fire melting down L.A. but he keeps looking right at me and I keep trying to look right back at him and this stupid thought keeps coming into my mind: I don't understand the oversized jeans and I never will.

I am a white woman and I teach another white woman and I recognize her I think because she looks so angry like I looked when people were trying to tell me what to think what to do what to write how to punctuate how to capitalize and I think we should have a kind of bond because I understand her anger and I know not to behave like a militant feminist or a fascist white teacher because that is what she hates but when I take a step in her direction I reach toward her like a comrade and she is closed she is lethal resistance she is like a gun at my temple another life another nation another world another language: who the hell am I to teach her?

I am a white woman and I teach a woman half chicano and half pueblo and I am spilling over with glee that we are studying a native american novel I am spilling over with all my sensitivity and my research into the myths and symbols of native cultures and my slides of petroglyphs from my trip to new mexico and arizona and my spirituality rap and I keep nodding and winking in her direction and her eyes are black and her hair is black and her stare is blacker than the chalkboard backing me up blacker than the words on the white page blacker than night and suddenly I get a jolt like I have been invaded by lethal molecules: get off of me, get off of me.

I am so lucky to have such a diverse class, aren't I the lucky one, the little white liberal teacher teaching varieties of new improved knowledge to her very special students.

You can't keep them all in, you know, some drift out of sight now and again. But you try. You try not to lose one gesture, one expression, one head tilt or fist clench or foot tap. You try to keep each body in your small vision. But you only have two eyes and one mouth against all those others.

Meanwhile, you spill words and words out at them. You watch as some of the words land gently and perfectly on the waiting sponges - those who are hungry and ready. This puffs you up somewhat, gives you the courage to go on. Some nod, blink recognition. This also makes you feel confident. You wave your hands around like a dove; bird of peace and victory.

But some of your words slice and gash at one of them. You try not to notice, but soon it becomes impossible to ignore, every word out of your mouth is an attack, a ripping open of the air around her. It is true enough that the wall surrounding her here is quiet and the voices burrowing in the channels of her brain have shut up for just five seconds, that's all she needs, she can draw the perfect line on the milk-white wrist, she can slice the thin skin and watch a small mouth open beautifully in the back waiting. For all we know tonight's the night.

A woman in a room today is a dangerous thing, Virginia. Right now there is a woman in a room in the back near the door who is only pretending to listen, who has a razor-blade and a fork in her bag. And her impenetrable eyes are set on anyone watching but her heart is on the razor and the fork inside. The razor-blade is for her, so that in some moment when there is quiet and the voices burrowing in the channels of her brain have shut up for just five seconds, that's all she needs, she can draw the perfect line on the milk-white wrist, she can slice the thin skin and watch a small mouth open beautifully into kiss. For all we know tonight's the night.

And there is a woman whose face is weathered from years and she tries to catch your attention just outside the door of the room because she wants in, she wants a drink, she wants you to buy her a drink, but maybe even more than that she tries to catch your attention because she has an amazing story to tell and it takes a really long time. Everybody knows this so they all avoid her eyes, you avoid her eyes too so that she won't talk to you, so that she won't tell you this really long story. But if by chance she does catch your attention she will shake your hand and introduce herself and she will begin to tell you the most fantastic tales of riding in a boat on the Nile, of riding in a gondola in Venice, and just about the time you think boats are all this woman has on her mind, that is all she is going to talk about she starts telling you about how she wrote letters to Herman Hesse and HE WROTE BACK so she wrote this really long book about his life, and there were of course many boats in his life and pretty soon you realize that it's not the boats she needs to tell you about but her life - THAT's what no one wants to listen to or hear about because it's too damn long.

And there is a woman in a room who works a few blocks from here at a large institution where they have a sort of secret language, I mean it is as if you need a secret decoder ring just to get in the door. There is a woman from there here and she is sitting in this room and she has fantasies about going on the road with an all-girls honky-tonk band because she always wanted to put a twang in her voice and play the tambourine on her hip. It's like she's been on a bus, a really ritzy, double-decker bus with a bar and lounge music and scary pointy-headed guys with postmodern white shirts and black pants and she couldn't get off, and now she is off and she just wants to stay here in this room and think regular thoughts and use regular words even though she knows it is true that language is not transparent and the epistemological ramifications of spending too much time alone in a room are HEAVY.

And there is a woman in a room with way too much make-up whose face is so familiar in the mirror that she cannot recognize it.

And there is a woman standing with other women who wants a woman across the room; her arm is almost touching the arm next to hers and there is heat-shiver there and on her other side she can smell another woman's hair like intoxication moving down her throat making the mind dizzy and her body untamed. And all the men in the room seem like children to her and she keeps wanting to scoop them all up in her arms and say come now, off to bed, little ones, so that she can turn out the lights and get on with it. And she is paralyzed between the women and the children, and as she stands there with useless hands and an unyielding mouth she is slowly forgetting her own name to desire.

And there is a brown-skinned woman watching a war-a-week on tv as the u.s. stitches border after border like a big white quilt around its whiteness. And the tv gets more and more animated and the policies get whiter and whiter until she looks down at the brown skin of her own arm and thinks, how do they tell the difference between molecules of difference? Is my arm ending or beginning?

And there is a clueless woman in the corner who is wondering what to do with her hands. She puts her hands on the table she takes them off the table she holds a drink she sets the drink down she holds a pencil she drops the pencil she brushes her hair out of her face she tucks a strand behind her ear she plays with her lip she scratches her front tooth she touches the rim of her glass she touches the face of the paper she puts her hands underneath her legs she folds them she sees them as incomprehensible.

And that's the trouble these days, isn't it Virginia, that we just don't know what we might do.

. “the glory of the liberal white teacher woman”, Electronic Book Review, September 1, 1996, .
Readers wishing to respond to an essay in ebr may send ripostes or short glosses to the journal’s Managing Editor, Will Luers.
PDF

Then isn’t it all just ‘hacktivism’? 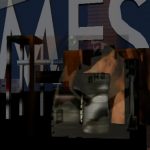