A gloss to Electronic Literature: Where Is It?

Though this suggestion may set up a misleading comparison (not to mention that moving from ‘if’ – ‘potential’ – to ‘when’ oversteps the mark). Clearly, video games are gaining what we can understand as literary sophistication, in particular those described by Juul as “coherent world” games. But there’s no reason to think that this sort of literary game is on course to subsume the non-literary variety (for lack of a better binary pair). After all, there will always be books and video games that occupy opposite sides of a literary continuum, so it is difficult to see what is actually being compared here.

Perhaps more importantly though, video games have been and will be a boost to digital lit and narrative. But they are not something the field should or needs to rely on for a piggyback ride to popularity and exposure. Such a suggestion would take some edge of the sharp insights made elsewhere in the article with regard to mainstreaming. 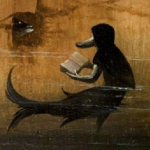