Interviewer - When you're discouraged or feel like quitting on your path, what tricks/activities do you use to put you back on the track?

Interviewer - With all the different scenarios possible for the end of planet, what do you envisage, and how would you cover the event if you were a reporter?

Interviewee - There is only one scenario possible for the planet: IT SHOULD AVOID THE FUTURE. However, since it cannot regress to the past, in spite of what most people wish, then it should rush full speed towards the apocalypse so that we can at least watch the greatest show on Earth LIVE, and not on television. Entrepreneurs should start selling tickets for the show.

Interviewee - God! a huge pimple on the ass of the universe. Like this: •"

Interviewer - If you died right now, what would you want to be inscribed on your tombstone?

Interviewee - My epitaph? Good question. Here lies a man who thought himself immortal until he was proven wrong!

On second thought, I think I would prefer what my lovely daughter once suggested when I was bitching that my books go out of print even before they are published. Yes: OUT OF PRINT!

As a bilingual writer perhaps my epitaph should be in the two languages that have struggled to come out of me the day I opened my mouth. In French it would be épuisé! How perfect.

When a book goes out of print in France they say it's épuisé!. Exhausted!

My epitaph then -- OUT OF PRINT / épuisé!

Interviewer - What is the biggest lie that is perpetrated on us?

Interviewee - The biggest lie! Well of course, the universe. The ex istence of the universe. How do you know when you look at the sky at night and you see al these stars out there that it's not fake. That maybe somebody, when back then, painted that sky for us. Maybe somebody like Michael Angelo.

Interviewer - With the state of the world so obviously out of control, how do you go about planning for the future?

Interviewee - I plot the future in the conditional. Or, even better, I always try to anticipate what would happen IF... If I were to do this or that. But most of the time I don't do this or that, but always do the contrary, I'm never wrong in the future. Or to put it in simpler and more direct terms: you cannot fuck the future! The future fucks you! I think I heard that in a movie. Yes! Now I remember, it was in Saturday Night fever.

Well, to get back to your question. This does not mean that I am a pessimist. On the contrary. If the future is going to fuck me that means at least the future will give me some pleasure. Blissfulness. Jouissance, the French say.

But you know what. I think the best thing to do to avoid the future is to do nothing. And that's what I do most of the time. Do nothing. Or as I once explained, in a poetic form, to someone who was criticizing me for doing nothing:

Having oscillated all my life
between the torments
of superficial idleness
and the horror
of disinterested action
I find myself at last
where to do nothing
exclusively
becomes an act
of the highest value!

Interviewer - What one question makes you most uncomfortable?

Interviewee - No question ever makes me uncomfortable because there are no false questions, only dumb questions. To ask if the moon is made of green cheese is not a false question, it's a dumb question. Now if you were to ask me what makes me the most unconformable, I would have to reply: The answer to a question. All the answers!

Interviewer - What is the worse rejection you ever had as a writer.

Interviewee - Oh, do I have a good one of for you.

One day I get this letter from the editor of an expensive glossy rich literary magazine saying that it would be an honor for him to publish a piece of mine in the next issue he is preparing because there is so little good avant-garde stuff that comes his way blah blah blah! So I sent this guy-editor a nice piece of my avant-garde stuff, and a week later he sends it back saying: I really like this piece, it's very good, very original, very innovative, but there are seven fucks in it, and I have already accepted a piece by another writer, and in it there are five fucks. Twelve fucks in one issue might be too much. Imagine that. Talk to me about editorial policy and literary taste. I have never felt so rejected.

Interviewer - Thank you for your time and your fine answers.

Interviewee - You forgot to ask the most important question.

Interviewee - Damn! I forgot what it was.

. “A Real Fictitious Interview Done by Smoke Signals”, Electronic Book Review, March 1, 1997, .
Readers wishing to respond to an essay in ebr may send ripostes or short glosses to the journal’s Managing Editor, Will Luers.
PDF

other essays by 222
Ray Federman

A Disorganized Multilingual A to Z Poem 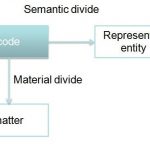