Mark Barret cautions against reinventing the wheel in this riposte to Cyberdrama and to Janet Murray's essay.

In college I took a run at academic criticism, including semiotics. I spent time studying films and writing them, studying fiction and writing short stories, and studying theater and writing plays. The most surprising thing I learned in my criticism classes was that most of the people sitting in the chairs beside me had no interest in making anything. They were there to learn how to talk about the medium they loved, not how to better create in the medium they loved.

To be clear, I have no axe to grind with anyone who enjoys debating the merits of any subject, from sports franchises to music to movies, but as a creator those debates do not further my cause. I need to know how to make things, and that means I need practical solutions and reliable techniques to draw from. If that be bias, then I would say it is the bias of the surgeon who needs scalpel and sutures to save the patient.

It's no secret that academic interest in the interactive industry has exploded over the past few years, but there is a wrench in the works. As an expressive art form interactivity is still in its infancy, and one of the core problems in the medium - interactive storytelling - has yet to be cracked. Over the past decade myriad failed commercial attempts have provided a number of important lessons, one of which is that the core competencies of the interactive entertainment industry are not particularly suited to solving this problem. This endemic failure necessarily led to a more theoretical analysis of how the problem might be solved, including research efforts at various academic institutions around the world. These academic research projects have in turn piqued the interest of academic critics in the medium, even though it is not yet fully formed.

Another more concrete lesson that can be taken from the failed interactive storytelling attempts in the commercial industry is that some things simply do not work. Many of these failed efforts were in fact valid approaches born of reasoned theory, which in turn helped define and describe the barriers we still face. Unfortunately, reading commentary from the academic world I sometimes get the feeling that these failed attempts are viewed more as serial stupidity than as the experiments I believe them to be. Like the NTSB reassembling and analyzing the scattered remains of a downed experimental aircraft, I believe analysis of failed commercial attempts at interactive storytelling can actually lead us to basic understandings about the theoretical limits of interactive storytelling itself, and I think the academic community is well-situated to begin that work.

I mention all this as preamble to my response to Janet Murray's essay in First Person. I have read Murray's essay three times now, and as a creator I must report that I can find nothing in it that is of use to me. This is not a criticism of Murray's rhetoric or of her essay, but a simple fact. Moreover, as someone who has been wrestling with the issue of interactive storytelling for close to a decade, I can say with certainty that many of the issues Murray raises have already been encountered in the commercial interactive entertainment industry. My concern with Murray's article is that she does not reference this considerable history in her own discussion.

For example, Murray begins her essay by proposing and defining a new term (game-story), after which she proposes a number of new ways of defining the medium as it exists today, and may exist tomorrow. That we have no common language with which to discuss the craft of interactive design, and in particular interactive storytelling, has been a recurrent problem. Doug Church first attempted to advance the cause years ago by codifying a number of Formal Abstract Design Tools for commercial designers, but in the intervening years we have made little headway. Within the academic research community the problem is worse.

Exacerbating the problem is the fact that turnover in the interactive entertainment world is high, meaning that every few years an almost entirely new group encounters and attempts to address the same craft-language deficit, with little or no success. (I have seen this happen myself at least three times in the past ten years, and my fear is that the academic community - through essays like Murray's - is now embarking on a fourth iteration.) Worse, significant problems can arise when new definitions ignore (or are oblivious of) practical lessons that have already been learned.

For example, here's Murray at the end of her essay, talking about 'agency':

"But the more useful question is, how do we make a better cyberdrama? One criterion that I have found useful is the concept of dramatic agency. Agency is the term I used to distinguish the pleasure of interactivity, which arises from the two properties of the procedural and the participatory. When the world responds expressively and coherently to our engagement with it, then we experience agency. Agency requires that we script the interactor as well as the world, so that we build up the appropriate expectations."

On the face of it I think I know what Murray is talking about here, but I'm not one hundred percent sure. If I'm just reading her essay to be able to kick a bit of theory around, that's fine. But as a creator looking for techniques that I can use to deliver interactive storytelling, agency presents two problems. First, there's the implicit claim that virtual worlds can respond "expressively and coherently" to user inputs in a dramatic context, which as a creator I know to be extremely difficult to achieve, and almost impossible to sustain. Second, there's the imposed constraint that we must script the interactor, which runs contrary to the freedom of choice that most people view as the main benefit of interactivity.

My point here is that in order to define and promote new terms such as agency, we need to be clear about the concepts upon which those new terms are predicated. After a decade one would think that there might now be a universally recognized definition of what interactivity is, but there isn't. My own states that interactivity is choice which determines outcome, but the very fact that I feel obligated to say `my own' makes it clear that we have not collectively answered one of the most basic questions facing our medium.

Now, it is true in the academic world, and in particular in the realm of academic criticism, that many of these problems are new. For that reason I certainly have no problem with Murray or anyone else attempting to codify the language of interactivity for the sake of analysis. If these efforts in turn lead to a more formal language that the industry itself can adopt, that's all to the good. And it may in fact be that the academic industry's inherent stability will provide an opportunity to establish the mature language of discourse that has so far evaded the more transient commercial industry.

What is not clear to me even now is whether that is the specific intent of Murray's essay, or whether she really does mean to go beyond language to questions of craft and technique. If academics are going to be helpful in solving the interactive storytelling problem, they need to be explicit about their intent, exhaustive in their historical analysis and rigorous with their language. The danger in failing to do so is not simply that confusion will arise, but that academia will perpetuate the reinvention of the wheel among the transient student populations in the same way these issues have reappeared a number of times in the transient commercial industry. And from where I sit, as a creator, the last thing any of us needs is another generation of designers thinking they're getting in on the ground floor of the interactive storytelling problem when they're not.

. “Academic Intent”, Electronic Book Review, June 24, 2004, .
Readers wishing to respond to an essay in ebr may send ripostes or short glosses to the journal’s Managing Editor, Will Luers.
PDF 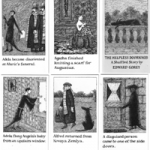 From Work to Play (sidebar)