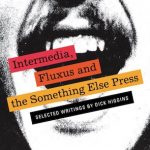 The recent trend of placing topic maps in a book's front matter can prove interesting—typically these are circles, functionally Venn diagrams, and they act as visual indices. One of the more intriguing topics of those that grace the front matter of Intermedia, Fluxus, and the Something Else Press is"Mail Art."Mail Art? There is no entry for it in the standard index but perhaps there should be: aside from co-founding the Fluxus art movement and creating the Something Else Press, Dick Higgins made brilliant use of the technologies of his time. Exploiting the reproducibility offered by offset printing and later the Xerox machine, Higgins copied the Something Else Press Newsletters and the Great Bear pamphlets, pairing them with the most powerful network available to him: the postal mail. Mail Art indeed.

Intermedia, Fluxus and the Something Else Press: Selected Writings by Dick Higgins, compiled, edited and curated by Steve Clay and Ken Friedman, is more than just a collection of Higgins' writings which range from philosophical to prosaic to deeply personal to spiritual. The book reads like a deep dive into Higgins' primary source materials. Clay and Friedman, in their effort to assert Higgins' place in history, include evocative visuals, such as book jackets from the Something Else Press and Higgins' own drawings and charts that accompany his written work. The multifaceted collection carries equal appeal for bibliophiles, enthusiasts of the 1960s Fluxus happenings, literary critics interested in intermedia, poets and writers, artists, and those generally curious about the avant garde movement of the 1960s. But aside from these more specialized groups, the life and work of Dick Higgins is instructive for a contemporary audience, helping us to imagine an approach to art and culture that values process over product and in so doing, stresses the human aspect of life in an increasingly mechanized and rapidly shifting society. Indeed the Fluxus movement, by definition, focuses on process, acknowledging that things are always "in flux".

Like Higgins and the Fluxus movement, the book is dynamic and full of possibilities. Indeed, Higgins embodies the personal as political—clearly, his life informed his practice and vice versa. Higgins writes unabashedly about dropping out of Yale in order to study musical composition at the New School with John Cage. With equal frankness, he writes about starting the Fluxus movement with George Maciunas, putting himself into rehab for alcoholism, and witnessing an earthquake with his two young daughters that shifted his notions about life and nature. And, as is clear by the close of his "Something Else Manifesto," Higgins does not cling to the notion that art or the activity of an artist is any more (or less) precious than other forms of living and invention: noting that "tomorrow one will write Schubert's Fifth Symphony, cook some kohlrabi, develop a non-toxic epoxy, and invent still another kind of theater; or perhaps one will just sit and scream; or perhaps…" (119). This is not to say that by holding art loosely, Higgins eschews respect for the art or artist; indeed, in this scenario, life itself is a work of art. It comes as no surprise that among the great variety "Fluxworks," Higgins notes that one of their common features is an "attempted resolution of the art/life dichotomy" (98).

An important, if lesser-known figure in his own right, Higgins is also significant for those with whom he collaborated and influenced. Peppered throughout the collection of writings, Higgins mentions among his mentors and friends such luminaries as Alison Knowles (Higgins' wife and mother of their twin daughters, Jessica and Hannah), Al Hansen, Nam June Paik, Claes Oldenburg, John Cage, Bertolt Brecht, Tomas Schmit, Marshall McLuhan, Marta Minujín, Gertrude Stein, Richard Maxfield, and Friedman. As Friedman notes in his introduction, insofar as the art world tends to be "driven by intellectual fashion, it is often unaware of its own history" (13). The book's copious documentation confirms Higgins' standing as one who created a new way of thinking about the interplay of art, media, and music. Moreover, underpinning nearly all of his work, Higgins stresses the importance of community as foundational to creating and sustaining art. Intermedia, Fluxus and the Something Else Press captures this sense of community.

Higgins writes that "flux pieces are imaginative, have multiple possibilities, are forms in progress and stir creativity in the observer" (108), and the book endeavors to ignite this interactive spirit in the reader. It is divided into four sections: I Fluxus, Happenings, Intermedia; II The Something Else Press; III The Constant Dialectic; and IV Pattern Poetry, Visual Poetry, Sound Poetry. Part I: Fluxus, Happenings, Intermedia, is comprised of articles and manifestos that reveal the inspiration for and inception of Fluxus. Here Higgins unpacks the foundational "Fluxattitude," which is one with a keen use of intermedia, a spirit of play, and an essence of "ephemerality" (91, 99-100). In Part II, "The Something Else Press," we literally see how the press came together. This would be the section for graphic design and ephemera lovers, as Clay collected pages upon pages of primary sources from the Something Else Press and Great Bear Pamphlets in section titled the "Something Else Press Checklist". Part III, "The Constant Dialectic," turns toward Higgins' deep theoretical investment in poetry and the nature of language, both formally and conceptually. This section contains a beautiful chart depicting the structure of intermedia as lying somewhere between art and theory itself. Also included are Higgins' manifestos, "Exemplativist Manifesto" (246-255) and "The Book" (270-273) and there is much crossover between the two. For example, in both he stresses the transformative nature of art dependent upon the medium or font used, the help and (mostly) hurt caused by critics, and the crucial role of the audience. Part IV: Pattern Poetry, Visual Poetry, Sound Poetry, provides a glimpse Higgins' academic interests, including a book chapter, "A Short History of Pattern Poetry" (282-300), the transcendental qualities of visual poetry (302-310), and "Points Toward a Taxonomy of Sound Poetry" (312-321) a historical overview of the genre that points to inheritances from Native American song, Lewis Carroll, and the Dadaists.

Of course, as is evident in the book title, Higgins is most recognized for coining the term intermedia, the subject of the first Something Else Press Newsletter. It's often repeated that Higgins was inspired by Samuel Taylor Coleridge's use of the term "intermedium," and Higgins notes at several points throughout the collection how delighted he was to find a kindred spirit in Coleridge's work. And while the Fluxus artist and Romantic poet were likewise interested in poetic chaos and ephemerality, Higgins reinvented Coleridge's idea to establish intermedia as a new mode of communicative media arts.

Until recently, Higgins' theory of intermedia has been picked up intermittently—but always with fervor—by media theorists mostly from Northern Europe. These include Interart Poetics: Essays on the Interrelations of the Arts and Media edited by Hans Lund, Erik Hedling, and Ulla-Britta Lagerroth (1997), Lars Ellestrom's Media Borders, Multi Modality and Intermediality (2010), and Travels in Intermedia[lity] edited by Bernd Herzogenrath (2012). It's no surprise that "arts-based research" has thrived in European doctoral programs, where the Society of Artistic Research was formed in the early 2000s. Increasingly however, the term intermedia is used in a more global and politicized mode as technologies shift the focus to formal elements, bringing a concomitant interest in a theory-practice model of education. There are Intermedia Art disciplines in schools internationally, such as Cal Arts (where Higgins and Knowles taught briefly), the University of Edinburgh, Tokyo University of the Arts, and the University of California at Santa Cruz.

In terms of a political agenda, many researchers and media scholars are turning to intermedia to understand the media flurry of a 24/7 news cycle, fragments of which stretch across platforms, institutions and individuals. Most of the early ecstatic accounts of the 'liberatory nature' of social media have been nicely quashed by both time and the Trump Administration: Twitter, which was lauded for having made the Arab Spring possible, can be just as easily marshaled as a tool of oppression. Still, the value of the term intermedia lies in its emphasis on the ways that form impacts meaning, forcing us to recognize the ways in which networked media can either hamper or help human communication… or both. And this makes perfect sense: Higgins' happenings, for instance, could be thought of as a humanizing response to the increasingly mediatized world of the late 20th century. Woven into Higgins' political agendas is also an undercurrent of this potentiality. In a compelling passage from one of his earliest writings, "Postface," Higgins is reflective:

One hopes to draw the mud, somehow, from the water.

But a century which began with the end of the US Civil War and the supremacy of a kind of culture suitable to another age is fast ending. This is the time our fathers hoped for. We flowers thrive on compost heaps. And some of us may turn out to be trees. The more trees, the bigger the forest.

Parallel to the Buddhist teaching that lotus flowers bloom out of the mud, Higgins' cheeky reminder that "we flowers thrive on compost heaps" is a testament to an optimism that seems somewhat naive, but refreshingly optimistic in the current cultural moment, which is characterized by cynicism and mistrust.

While Higgins' manifestos, analyses, visual charts on poetry, intermedia projects, and the Something Else Press book designs are inspiring and worthy of study, readers might notice a discursive thread of Higgins' personal life that runs throughout. For example, in several different essays Higgins recalls how Knowles, his lifelong collaborator, wife and the mother of his children, helped him name the Something Else Press. After Higgins said he'd start publishing on his own and wanted to call it Shirtsleeves Press, Knowles said, "That's no good… call it something else." And, "at that moment" Higgins writes, "the Something Else Press got its name." Although this detail is charming and seemingly small, it captures Fluxus's gesture to potentiality, the sense of something just about to happen and again reinforces that seemingly nothing in Higgins' world occurred in isolation. In the same vein, the portraits by Ken Friedman and Hannah Higgins that bookend the collection offer a tender look at Higgins the man and offer a broader scope of the vast potentiality of Higgins' current and future legacy. It is worth revisiting these snapshots of Dick Higgins after reading his collected works. They provide an inside view that rounds out Higgins' lofty theories and achievements, turning them into something warmer and more human—and something that perhaps Dick Higgins would've perhaps appreciated most of all.

Sullivan, Betsy and Virginia Kuhn. “Many Lives to Live”, Electronic Book Review, November 3, 2019, https://doi.org/10.7273/2hpw-0a15.
Readers wishing to respond to an essay in ebr may send ripostes or short glosses to the journal’s Managing Editor, Will Luers.
PDF
This essay was peer-reviewed.

The Rules of the Game 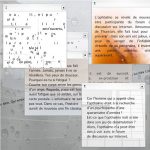 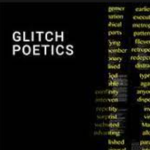