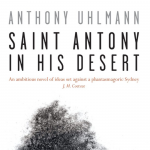 For Martin Eve, Anthony Uhlmann appears to be writing for a very small audience: "those who are interested in contemporary mutations in metafiction, autofiction, and post-postmodern sensibilities."

Imagine reading a work of fiction written by a man called Anthony Uhlmann. In this novel, the central premise is that a defrocked priest, called Anthony Elm, is writing two works on the back of one another. One of these concerns a fictionalised version of Albert Einstein's visit to France and his encounter there with Henri Bergson in April 1922. The other is about the alternative music scene in Australia in the 1980s and two men's immersion in this space. The third narrative of the book sparsely relates the story of Elm. The three narratives are set in different typefaces to distinguish them from one another and the work juts between them paragraph by paragraph. The book itself adds a further "Ant(h)ony"; it is titled Saint Antony in His Desert. If you have managed to imagine this thus far, you have a pretty good idea of the experience of reading Uhlmann's book; multi-layered and self-consciously clever – though some would say, pretentious – this work is not going to be for everyone. But for those who are interested in contemporary mutations in metafiction, autofiction, and post-postmodern sensibilities, this book offers a rich trove.

More broadly, this novel poses questions of what it means to write literary criticism, philosophy, and fiction as discrete categories in the twenty-first century. When a book is so clearly asking its reader to consider the authorial and fictive relationship between its protagonist and various nested characters of the same name (albeit as postmodern metafiction did for many years), but it does so through the publishing imprint of a university press, it is obvious that this work is, itself, enacting an inquiry into the nature of the novel. It also, though, through that publishing house, prompts questions of legitimation and power; what is the role of the academy in the production of such works?

Indeed, Uhlmann's novel is an example of what I have called taxonomographic metafiction; that is, "fiction about fiction that deals with the study/construction of genre/taxonomy".1Martin Paul Eve, Literature Against Criticism: University English and Contemporary Fiction in Conflict (Cambridge: Open Book Publishers, 2016), p. 163. It asks us to think about ideas of classification – "academic" writing vs. fiction vs. philosophy – through its own formal conceit. Can the novel, this work seems to ask, itself think? Is the novel form one of communication in the same way as an argumentative essay? If not, why not? For "the distinction", as Peter Boxall writes, "between creative and critical writing is becoming harder to sustain" in the twenty-first century.2Peter Boxall, The Value of the Novel (Cambridge: Cambridge University Press, 2015), p.5; See also Mark Currie, 'Introduction', in Metafiction, ed. by Mark Currie (London: Longman, 1995), pp. 17–18; Ramsey Selden, 'Introduction', in The Cambridge History of Literary Criticism, ed. by Ramsey Selden (Cambridge: Cambridge University Press, 1993), 8: From Formalism to Poststructuralism, 1–10 (p. 7); Umberto Eco, 'Reply', in Interpretation and Overinterpretation, ed. by Stefan Collini (Cambridge: Cambridge University Press, 1992), pp. 139–51 (p. 140). And if everything, as Professor Einstein might put it, is relative with no consistent frame of reference, how can our shared social categories that define writing and genre hold?

Yet, not everyone subscribes to the view that there is a contemporary melding of creative and critical practices. Recent computational approaches by Andrew Piper have revealed that this breakdown of boundaries is less pronounced than we might imagine. Piper shows, for example, that machine classification can distinguish between fact and fiction with over 95% accuracy using just a 1,250-word stretch of text, despite poststructural pronouncements that there is no specific characteristic that could lead to such discernment.3Andrew Piper, Enumerations: Data and Literary Study (Chicago: The University of Chicago Press, 2018), pp. 94–100. Derrida's rejection of the "formal specificity of the literary work" was never actually accurate.4Jacques Derrida, Positions, trans. by Alan Bass (Chicago: Chicago University Press, 1981), p. 70.

As readers, though, we can often make a different type of judgement: whether a book works as a piece of fiction. Certainly, Uhlmann situates his work within that long lineage of fiction with a false editorial framing device. It is then perhaps more a failure on my part as a reader, but the portions of Uhlmann's novel that most gripped me were the sections on Einstein and his encounter with Bergson. Certainly, these researched narratives themselves were fictionalised and mediated through several layers of narrative; it is not true to call these a purely factual account, even where based on archival sources. Perhaps this is because I know more about relativity and Bergson than I do about the underground music scene in Canberra; the curse of "relatability", as it is termed, in fiction. Yet despite the incredibility of Einstein's revelations, the truly unbelievable seems to break through most thoroughly in the second narrative of the text. Certainly, I have never been thrown out of a taxi by the driver for my lack of knowledge on Foucault (both because I know quite a lot about Foucault but also because the subject has never been broached). Yet this is precisely what happens in St Antony in his Desert.5Anthony Uhlmann, Saint Antony in His Desert (Crawley, W.A: UWAP Publishing, 2018), p. 75.

A further example: the music around which the second strand of the novel centres focuses on a band called "prototaxis". This biological term denotes conditions when one organism or cell reacts in a definite manner to another.6Ivan E. Wallin, 'Symbionticism and Prototaxis, Two Fundamental Biological Principles', The Anatomical Record, 26.1 (1923), 65–73 (p. 66) &lt;https://doi.org/10.1002/ar.1090260108\>. In other words, despite relativity, this band is named for a mechanistic phenomena of the sort that Einstein defended against the probabilistic threat of quantum mechanics. In short: the novel consistently holds out these clues for the reader to follow. It conditions interpretation by seeding ideas using the names of theorists, or allusions for the reader to follow. Of course, this is how all novels work – they intend to provoke effects in readers – but in the case of fiction such as St Antony in his Desert, the trail seems specifically to target an academic (perhaps even humanistic) community who will pick up on the Foucault references, will know something about Bergson, and who will trace etymologies of names.

Furthermore, as just one of the realist dictums that the novel violates, St Antony in his Desert is not even a novel that calls for suspension of disbelief. Its approach is so obviously cerebral – a work that through its form demands the reader work at the meta-level to construct meaning – that I felt immersion in its characterisation was often lacking (an age-old complaint about postmodern metafiction, too, to be fair). This is not the result of bad writing; it is a consequence of the form, which consistently cuts between different frames of reference. Indeed, others might have better mileage here. For, after all, one's experience of this strange, fascinating, anti-novel is likely to be relative.

Eve, Martin Paul. “Taxonomographic Metafiction: A review of Anthony Uhlmann’s Saint Antony in His Desert”, Electronic Book Review, April 7, 2019, https://doi.org/10.7273/n22a-y549.
Readers wishing to respond to an essay in ebr may send ripostes or short glosses to the journal’s Managing Editor, Will Luers.
PDF
This essay was peer-reviewed.

other essays by
Martin Paul Eve 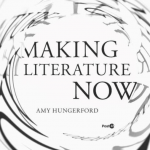