Marie-Laure Ryan has perhaps done more to extend narrative theory in light of digital media than any other critic to date. In one sense, this is all the more reason to scrutinize the works that constitute her prolific contribution to a field growing in both size and sophistication. Scrutiny is exactly what the reviewers of Ryan's Narrative as Virtual Reality provide and the reviewers do identify points of imprecision in the organization and presentation of the categories upon which the study is built. The review, however, manifests a degree of imprecision itself, which motivates my own response.

The review is structured in two basic segments: 1) framing comments on "hypertext" and 2) a specific critique of Ryan's discussion of Realism in establishing the relationship between her two conceptual poles of immersion and interactivity. The criticism of Ryan's at times all too tidy treatment of Realism is a valid one, and Luc Herman and Bart Vervaeck are able to support their claim that such a treatment seems necessary for Ryan to balance her theoretical model as a whole. At the same time, it helps to bear in mind that Ryan draws on Realism in the service of establishing her other categories, and given that this is not a book on Realism, she undoubtedly makes a valuable and exhaustive intervention in the debates about immersion and interactivity. Articulating categories is invariably a challenge; disarticulating them can be more like intellectual target practice.

The framing paragraphs that open the review, by contrast, raise some questions. The suggestion in the opening line of the review that "[h]ypertext has two main characteristics" is troubled by the fact that the authors do not specify what sort of hypertext they refer to here, and it is difficult to see how they justify these characteristics as "main" ones. For example, the first main characteristic is described in the following way: "[D]ifferent layers of the text are often visible at the same time, for instance when a mouse click conjures up another text." Even if we present this description as a single characteristic ("layered textuality," for example), it remains unclear what sort of layering is being described - does this refer to the possibility for multiple windows to be open on the screen, or does it refer more specifically to the digital palimpsests exemplified by the early hypertext poetry of Jim Rosenberg, where different textual layers are literally visible at the same time? By extension, does such layering refer to both hypertext poetry and prose (or solely the prose fiction that is Ryan's focus)? After all, an active link "conjuring up another text" in most screen-based fiction actually replaces the node that anchors the link; the two layers are not "visible at the same time." Regardless, it is difficult to see how this layering would be a "main" characteristic; rather, it might be a distinctive quality of some forms of digital poetry and a potential nuisance in a work of narrative fiction.

The second characteristic, "the importance of the reader, who often becomes a player," similarly lacks precision. This characteristic of "reader-as-player" might apply in a weak sense to some works of digital fiction that make use of hypertext technology, and might apply more readily to Interactive Fictions (or IFs). IFs, however, are not strictly "hypertexts" but rather textual interactions which primarily require textual input, not a selection of links; and, as a limit case between narratives and games, the term "player" itself is contested as connoting a game by default. Furthermore, if one continues moving away from representation and toward simulation, away from interpretation and toward configuration, or even away from reading and toward play, the notion of reader-as-player applies to a wide array of textual and video gaming environments. But in these contexts, the role of a "reader" is in fact no longer an "important" one. Part of the difficulty of these claims, again, can to some degree be traced back to the absence of any further qualification of the role of "hypertext" (which, in itself, must be understood as a form of digital technology, not digital literature).

The discussion of temporality and spatiality in the framing paragraphs of the review also betrays moments of imprecision. The authors claim that "the dimensions of time and space" differ in textual and hypertextual worlds. They further suggest that

[h]ypertexts showcase a visual and, in certain applications, even a tangible world representing time and space concretely, which is not the case in literary works. In fact, in the literary text, time and space are no more than metaphors, while traditional narratology pretends they are real - as if these texts actually staged a time, a space and a world.

The shift from an opposition of "textual and hypertextual" to the "literary text and the hypertext" has undesirable if unintended implications, but more troubling is the relative (in)ability of the printed text to represent time and space in relation to its digital counterpart. True, digital narratives do offer up new measurable or quantifiable variables, such as temporal phenomena that arise from transient text, or spatial qualities related to the structure of network topologies, but there is no indication from this passage precisely which of these are relevant to the argument, or how exactly how these representations are comparatively more "concrete" (in one reading, the verb "represent" is the wrench in the works). The review would have benefited from further clarification of the comment that "print narratology pretends" that these categories are "real," or at least which narrative theorists exhibit this tendency, and indeed an indication of the level on which these categories are being addressed - for instance, that of the storyworld, discourse, narration, medium, or even that of pragmatic reading / playing. Also, in a work of narrative fiction, time and space are not merely metaphors (Walter Ong's description of all writing as "spatial" in that it involves the arrangement of symbols on a dimensional plane is a viable starting point); and, if anything, narratology has a surplus of terminological distinctions for their varied expression in the formal and semantic elements of the text.

Surely "hypertext" has expired in its capacity to stand as a metonym for the broader range of digital-literary works. Just as the field of digital art and culture continues to expand its borders, writing in digital environments must continually redefine its own internal borders. This issue is something I try to address in a collection of essays on what I've called "network fictions,"Ciccoricco, David. Reading Network Fiction. Tuscaloosa: University of Alabama Press, forthcoming 2007. invoking a term that has been used variously by Noah Wardrip-Fruin (in reference to his Book of Endings) and, more obliquely, by Scott Rettberg (in reference to his "network novel" The Unknown). The intent, however, is not to add to an already bloated cyber-vocabulary, but instead to endow the terms and concepts with greater precision. More important than the term "network fiction" is in fact one of its main characteristics: network fictions can be described as works that are designed to be read (and, indeed, re-read). They are techno-literary works that have an investment in the notion of reader-as-audience and in the implications of digital environments for discursive and poetical complexity. In turn, such works share an investment in what Espen Aarseth (1997) has called the "interpretive function"; what David MiallMiall, David. 2004. Reading Hypertext: Theoretical Ambitions and Empirical Studieshas described as the "additional complications that the digital medium places on the work of interpretation"; what poet John Cayley has called the "literal art" of "networked and programmable media"; and what the electronic book review has probingly called electropoetics.

My own insistence on attending to forms of digital writing that not only maintain but also perhaps intensify the interpretive role of reader as audience, viewer, or critic should not detract from the overall contribution of this review, which clearly has a divergent focus. All in all, the authors have demonstrated both foresight and insight in their writing on a significant figure in an exciting and challenging field.

. “The Importance of Being Narratological”, Electronic Book Review, March 17, 2006, .
Readers wishing to respond to an essay in ebr may send ripostes or short glosses to the journal’s Managing Editor, Will Luers.
PDF

other essays by
David Ciccoricco

Locating the Literary in New Media 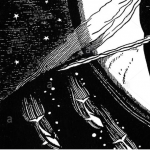