Jesper Juul takes time to complicate the real in different types of games.

If we step back for a moment and categorize games according to whether they specify the duration of play time (the time of the playing) and/or event time (the time in the game world), we get four basic game types:

3. Games specifying only event time: turn-based games that project worlds such as adventure games (Myst, etc.) or board games like Axis and Allies.

The majority of present-day computer games fall into the fourth category. The question is what this tells us.

I don't think that Celia Pearce and I disagree that much on the question of paced vs. turn-based games. My point is not that real-time games are inherently better or ultimately more compelling than turn-based games, but we can observe that non-paced computer games have all but disappeared: the strategy game has become real-time strategy; the adventure game is often pronounced dead (and is perhaps being replaced by games like Alice or Half-Life); the commercial puzzle games are real-time. For better or for worse, the computer game industry is maturing and has to focus on creating products that are immediately captivating. I do think that, especially in single player games, real-time has a more immediate appeal, since the player can start the game and instantly be forced to counter attacks or solve puzzles. I don't think that a real-time version of Monopoly would be more compelling, but it would still be very hard to sell a new turn-based computer game.

The irony is that a lack of pacing may at first sight appear somewhat dull, but that this also makes for a broader appeal since, as Celia Pearce notes, the player can in effect adjust the skill to his or her own level simply by acting faster or slower. It is not just a question of turn-based vs. real-time but also of single player vs. multiplayer -- in multiplayer turn-based games, social pressure, house, or tournament rules may limit the amount of play time available for turns. Or to put it another way: if a multiplayer game does not enforce pace, social circumstances will.

The learning curve and the distribution of sub-goals both decide the minimum amount of time you can put into a game session and when you feel able to stop playing for the day. As Mizuko Ito mentions, the time scheme of a game decides how it can fit into your life, and thereby selects the market for the game.

Education is important, but professional academics as well as students need to be educated. We need to play more games, to paint a broader picture, and to look at specific games in more detail.

Time is not the end-all privileged perspective on games, but it is one that connects easily to many interesting discussions. It may be complementary to the narrative perspective, but also dissects games along some different angles. This is probably not a problem. As things stand, we need to allow ourselves to examine every possible perspective and ask every possible question.

. “Jesper Juul responds in turn”, Electronic Book Review, January 10, 2004, .
Readers wishing to respond to an essay in ebr may send ripostes or short glosses to the journal’s Managing Editor, Will Luers.
PDF

other essays by 222
Jesper Juul

Why Make Games That Make Stories? 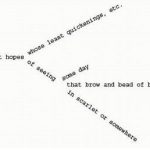