There is an uncalculated cost to abstracting information patterns from a body, and then again to forming a "data body" from patterns: an energetic cost, a time cost, and a loss that comes from viewing bodies as mere vehicles for pattern, whether that pattern be mathematical, statistical or structural.

Vesna addresses these issues in n0time, as she did previously in Datamining Bodies. Her solution is to visualize social networks using tetrahedra and tensegrity (Kenneth Snelson, Buckminster Fuller) principles. In other words, a figure that has shown itself to be highly useful at many scales for gravitational architectures—of all polyhedra, the tetrahedron has the greatest resistance to an applied load—is proposed as equally good for a networked social information architecture; it is hoped that its mathematical beauty—the tetrahedron is its own dual, the tetrahedron is at the root of an omni-symmetrical spacefilling vector matrix—will re-emerge as beautiful human interaction.

Vesna states that her n0time project was inspired by (1) a pervasive lack of time "to socialize, to think, to be in a space where there is no constructed time related to efficiency and productivity"; (2) the Y2K moment, in which we became conscious of complex connectivity, of dependence on networks, of our fear of disconnection; and (3) a persistent demand from participants in her earlier Bodies INC project, which used graphical human-appearing avatars, for a way to create a community and communicate with each other.

One point muted by this paper is that there are many structures, many mathematics, and many forms of networking that might be played and plied to the human ends Vesna envisions, namely "to move towards embodied information, with all its human qualities..." The very question of whether graphic visualization is the mode for that task, as opposed to a sonic score, a textual environment, scientific visualization, or some combination, has not begun to be comprehensively researched. It will no doubt prove true that no single environment or architecture will prove best for all people or all purposes.

How does n0time work? A major interface confusion, for a project whose title and motivation has to do with time, is the use of the term "interval" which can apply to space or time. People who log in online, or selected members of an installation audience, are invited to "spend a few minutes... determining the length of six intervals," namely the six edges, from which their tetrahedron is built. Though they are given color charts and one-word categories (family, spirituality, finance, etc.) to select from, and may believe they are assigning a length=importance measure to these categories, in fact they are not. In the first place, six edge-lengths for a tetrahedron cannot be determined independently; in the second place, unannounced to the participant, their decisions are being "timed." The amount of time they spend selecting a length, or strength, measure for the categories drives the resulting evolution of the n0time tetrahedral body. The data body is further personalized by choosing four memes, one per vertex, with which the participants associate a soundscape, creating "a unique composition for each person."

Whether this unique composition well represents someone for human communication is, I think, open to question. Vesna cites both chaos theory and tensegrity background for her work, but I think the thermodynamic-based thought of Fuller is more prominent than the chaos studies. It would be interesting to test the n0time system for sensitive dependence on initial conditions, that human input which has been so abbreviated, and in part unknowing.

The other difficulty, for me, are the memes. The trouble with memes is they can't be thought—they, rather, present themselves as units of thought. As with genes, blasts of energy must be brought to break them up. A project that interrogates the meme "clone," not to propagate it through recombination, but to destroy it, so that a more adequate concept might arise, is Natalie Jeremijenko's OneTree. Jeremijenko's cloned tree/s looked different, even as seedlings within their nursery environment, to the great disappointment of visitors trained by the meme to believe that they should expect perfected identity. The clone tree/s, now planted around San Francisco, continue to diverge in history and appearance, giving the lie to genetic determinism, DNA code as the essence of life, and other implications of the "clone" meme.

The destination of the n0time data body is a dramatized, announced implosion which occurs automatically when it reaches a point of information overflow, stated on the web site n0time.arts.ucla.edu: "The overflowing body is archived and accessible only to the owner." Since "[e]ach n0time body becomes a chat room where people can meet," it seems the function of the program is to kill and remove the "old body," as occurs on MOOs, but without offering the actual affordances for communication and community present on many MOOs.

How does n0time relate to time? A claim Vesna makes in her introduction is that distributed presence shifts our perception of time. I do believe that online experience and distributed presence shift our perception of time, as I have argued in "Dalí Clocks: Time Dimensions of Hypermedia." Vesna wants to make audiences aware "that one fearful thought, one rumor, one meme can spark a ripple of change in our consciousness," and the perception of a wave effect traveling through a visualization may well do this, creating a sense of that Y2K moment, but neither our lack of time nor our craving for communal communication are relieved.

To the contrary, the n0time project, though demanding very little initially from its participants, is very time-intensive thereafter. Participants must individually vet those permitted to interact with their data bodies, even though, somewhat ironically, Vesna's own experience of connecting with her programming collaborator, Gerald de Jong, came not from her personal 500-person network but through that open-ended, time-draining activity, "researching on the Web." Any communication (other than intratetrahedral) occurs as a result of logging in, or navigating onsite at an installation, to check out avatar growth and perhaps engage in chat, devoting "attention and time," as Vesna states.

I would hope that in one of the further phases of n0time its interface and visual display would more clearly communicate that a timed profile was being collected. Might it also explore other times and timings—dating of time-sliced structures, variously timed rates of growth and disclosure, filtering for rhythmic preference? Community according to time available is presently created by listservs and chatrooms, but community sensitive to variations in time-handling is not understood.

Any kind of time/timing system calls for calibration. A lunar calendar must be calibrated with a solar one, and these with an atomic clock. The interrelation of these, or their analogues, could be handled within a digital network—and the experience of "living with" different intervals could be sampled. We know, from written accounts, that a world timed by sun position felt very different to one governed by the ringing of church bells, and that, in turn, very different to one organized into international time zones and transportation schedules. Time online is yet another time world, one that n0time may perhaps explore more specifically. With variations in the representation of visitors and with a greater variety of time paths by which their data-bodies seek others, n0time can teach us more about social network creation.

. “Stephanie Strickland’s response”, Electronic Book Review, March 30, 2004, .
Readers wishing to respond to an essay in ebr may send ripostes or short glosses to the journal’s Managing Editor, Will Luers.
PDF 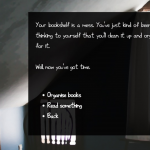