At times I find it hard to follow Bill Seaman's visions. He writes in the future tense, mostly, with a dream-like enthusiasm for the potentials of technological expression. I read about hybrid systems, built of recombinable objects that generate new signs conveying emergent meanings, new meanings. In many ways this article is such a system itself: it draws together notions, words and citations repeatedly and in changing combinations. Brief mentions of his own artwork leave me hungry for more. Seaman, I think, has a vision of embodied interaction where the machine merges with physical space and surrounds us, bathes us, reacting to our gestures and voices and not just to the tapping of a keyboard. What happens to me when I interact with such a machine?

I see the continuum between our bodies and the machines in my simple use of a computer today. Though the text (this response I'm writing, a hypertext fiction I read, net.art, Online Caroline) is safely locked behind a screen, the screen and keyboard can also be seen as part of the text. Where do I stop and where does the machine begin when I type these words, or when I engage with an art piece? I can carefully see myself as separate from the machine, but sometimes I dive down imagining we are one, like Kristeva's infant before she knows she is herself and not part of her mother. That blurred space (continuum) where I can't tell the difference between me and it is a place of chaos and creativity, of magic and horror alike. Am I a machine? Is the machine an organism? Often, I let the machine control me, delighting in the skill of my fingers and my mind in following the strict rules that I've learned in order to use this machine.

Seaman writes of potential and emergence and I think he believes that vusers are free in all this, capable of recombining and reinterpreting objects to create new hybrids. "Increasingly, one can intentionally reinterpret the potentials of a functionality and thus move outside of the specified programmed probable outcomes of a system and move into the realm of emergent experience through the recombinance of object-based functionalities," he writes. I imagine patterns (combinations, signs, texts, hybrids) that did not exist until being vused and that could not be predicted; meanings that weren't intended by the human(s) who created the machine but that emerge in the meeting between me and it. I feel the seduction of the idea but I know that I haven't experienced this yet. Digital art (installations, net.art, games, hypertext fiction) seem to me to disempower the vuser more than most previous art forms do. My freedom, my co-creation, is highlighted in the artist's statements I read in the catalogues, or in some of the early theoretical work in the field (Landow, Bolter) but when I actually meet these art works I feel shackled to their rules: sit here, press this button and only this button, move the mouse, follow these links, watch this, move this, walk down these narrow paths. I have to figure out what the computer wants me to do and do it: then it will recombine its bits and pieces and perhaps show me something that no one, not even the author, has seen before. The rules don't emerge in the continuum between me and it. On the contrary. It sets the rules, and I must obey them in order to "interact" at all.

. “Jill Walker’s response”, Electronic Book Review, March 23, 2004, .
Readers wishing to respond to an essay in ebr may send ripostes or short glosses to the journal’s Managing Editor, Will Luers.
PDF

other essays by 222
Jill Walker

How I Was Played by Online Caroline

How I Was Played by Online Caroline (sidebar) 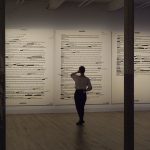