A book about books conscious of their materiality, N. Katherine Hayles' Writing Machines draws praise from Raine Koskimaa for its own media consciousness, and blame for embodied emphasis.

Writing Machines is the second release in The MIT Press's new Mediawork Pamphlet Series, which pairs leading writers and contemporary designers to produce pamphlets involving emergent technologies that are accompanied by exclusive WebTakes. This series gives much freedom to both the writer and designer, and this book takes full advantage of that freedom.

After previous weighty scholarly volumes such as Chaos Bound (1990) and How We Became Posthuman (1999), Hayles is writing in a totally different tone here. In this pamphlet, she gives a "pseudo-autobiographical" account of her early academic career, through which she both recounts her own growing interest in electronic textuality and develops the notion of the materiality of writing. The solution of leaving the bulk of notes to the WebTake (not available at the time of this writing but covered elsewhere in ebr) is well in accordance with the autobiographical writing style - even though this tone is momentarily lost in the more or less independent essays discussing the electronic text Lexia to Perplexia (by Talan Memmott, 2000), the artist's book A Humument (by Tom Phillips, 1970), and the print novel House of Leaves (by Mark Z. Danielewski, 2000).

The story of Kaye - as Hayles calls herself in the autobiography - tells of a small-town Missourian who tries to compensate for the boring intellectual environment through books found in the town library. When we combine this diet of books found in the small library without too much investment in novelties with English and American Renaissance Lit studies at Caltech, we get a picture of a person with quite a traditional literary background. The bigger the contrast, naturally, then is when she is confronted with a desktop computer and has the sudden realization of the inherent possibilities of electronic textuality.

According to Hayles, "This book is an experiment in forging a vocabulary and set of critical practices responsive to the full spectrum of signifying components in print and electronic texts by grounding them in the materiality of the literary artifact." The vocabulary Hayles uses mixes more- or less-known existing terms and her own neologisms, including technotexts, material metaphors, inscription technologies, media-specific analysis (MSA), remediation, and medial ecology. She explicitly wants to avoid adopting the concepts of hypertext and cybertext, as "[t]o use one term or the other is not only to invoke a particular approach but to position oneself in a highly contested field where allies and enemies sometimes count more than arguments." Thus, she prefers the term technotext, meaning a literary work that interrogates the inscription technology (a device which initiates material changes that can be read as marks) that produces it, mobilizing reflexive loops between its imaginative world and the material apparatus embodying that creation as a physical presence. It is possible to read Espen Aarseth's Cybertext: Perspectives on Ergodic Literature (1997) as mostly neglecting the media-specific differences, but cybertext theory generally has laid much weight on media-specific analysis. Thus, it is hard to see what kind of better grip of texts like Lexia to Perplexia we can get through one more new vocabulary, instead of the cybertext theory which has well worked concepts to deal exactly with the "reflexive loops" mentioned here. Still, there is a huge need for actual, MSA-oriented treatises on all kinds of texts, no matter the vocabulary used; in that, it is very easy to agree with Hayles.

The book design is by Anne Burdick, the design editor of the electronic book review. Considering that the book itself is rather small in dimensions, printed black and white, on not-too-high quality paper, Burdick has managed to make this book fun to look at. On a more functional level, especially with the essays dealing with literary texts, the way to include not only the words of texts discussed, but also their visual appearance as it is in the original, works well. Anybody writing about postmodernist fiction like House of Leaves should have this kind of typographical possibility available! But it is just this effort put to the material book object at hand that inevitably draws one's attention to the fact that an electronic text like Lexia to Perplexia can only be partially reproduced in print - in this sense the collaboration of Hayles and Burdick manages well - and one cannot but, once again, notice the obvious need of technotextual criticism of technotexts. The problem of discussing electronic texts in print becomes even more explicit in Chapter 7, "Embodiments of Material Metaphors," where Hayles discusses Adriana de Souza and Fabian Winkler's installation database. Even having seen the installation live, I found it hard to follow Hayles's description of it.

In her reading of Lexia to Perplexia, Hayles identifies three principal strategies for making the reader understand herself "as a permeable membrane through which information flows." The first of these are linguistic ones, including neologisms, and Creole discourse mixing English and computer code. In the second category are rewritings of myth, especially the story of Echo and Narcissus. And the last one is a symbolic visual language. Hayles's treatment of Lexia to Perplexia is at its most rewarding when she deals with the computer-code-laden Creole discourse, the way the computer code "shines through" the English language, like "cell...f (and cell.f), homophones for self that conflate identity with a pixilated cell and the notation for a mathematical function." It is, however, not quite as convincing when Hayles concludes that Lexia to Perplexia tells "new stories about how texts and bodies entwine." Her skillful interpretation of the linguistic and intertextual aspects of the work seems to fight against her own conclusion: even a work like Lexia to Perplexia still mainly stimulates the mental-interpretational impulses, not so much tactile or other bodily functions.

The chapters about artists' books and especially the reading of Tom Phillips's A Humument is the most inspired section of the book. Here, the writer's genuine thrill when she encounters the world of artists' books for the first time is so tangible it cannot but pull the reader along. It is here, too, that Hayles's arguments for the need of study on the materiality of writing - indeed the slogan, "Materiality is content, and content is materiality" - gains its best persuasive momentum. Hayles's point here about the resistance of A Humument "to an immaterial realm of disembodied verbal signifiers" would be much harder to drive through without the fine layout juxtaposing the essay and passages from the work discussed.

Obviously, Mark Z. Danielewski's House of Leaves is seminal in Hayles's discussion of media-specific analysis and the materiality of writing. Here, Hayles gives a very thorough analysis of the multimediated nature of narration in the novel, especially through the film/video editing processes. But when she concludes that "as readers enmeshed in the book, we find ourselves positioned, like Will Navidson, inside the book we read, receiving messages to be sure but also constituted by the messages that percolate through the intersecting circulatory pathways of the book called House of Leaves," we face some serious problems. If we take print books as "material metaphors" that turn words into actions in the real world, we risk losing the distinction between different types of technotexts, the very material and media-specific differences Hayles has been drawing so finely all along. House of Leaves doesn't differ in any fundamental way (if you do not count the best-selling figures here) from such earlier experimental print novels like Gilbert Sorrentino's Mulligan Stew (1979) or Raymond Federman's Take It or Leave It (1976), novels which metatextually and metafictionally reflect their own material nature, and which "invite" the reader into the fictional world (although invite may not be the right word in Federman's case, where the "reader" is sodomized by one of the fictional characters). No matter what textual strategies are used, or how persuasively they produce the immersive experience, as readers we always stay outside of the textual world, and the relations are merely metaphorical, a fact Hayles herself makes clear when mentioning Italo Calvino's If on a Winter's Night a Traveler (1981). If we compare this reading experience to that of Lexia to Perplexia, we already see a difference in the way that the reader's actions do have a visible effect on the screen. And if we go further to works like Noah Wardrip-Fruin, et al.'s Impermanence Agent and the like, the difference is even more palpable; the feedback loop between the work and the reader functions in specific ways in each case, and media-specific analysis should also be attentive to these differences.

Writing Machines is an enjoyable read, and it makes the important claim that not only electronic texts but all texts in the digital era need a new perspective and a new vocabulary for critico-theoretical discussions. As a "pamphlet," it is clearly not even trying to build a well-wrought theory, but rather attempts to partake in the ongoing discussion of the new forms of textuality. Excusable also, in a pamphlet, are interpretations that are sometimes quite far-flung, especially in the exaggerated role of bodily involvement in reading technotexts (however, we'll definitely get there, sooner or later, and some artists like Eduardo Kac are already quite far down that path). In any case, it is never too often stated that, especially with electronic texts, there is much need for more elaborate ways to do media-specific analysis. The field is pretty open still - it is good to have thought-provoking, even playful, experiments like this to widen the discussion.

The Hayles/Burdick collaboration is also reviewed in ebr by Komninos Zervos. - ed.

Koskimaa, Raine. “The Materiality of Technotexts”, Electronic Book Review, March 27, 2003, .
Readers wishing to respond to an essay in ebr may send ripostes or short glosses to the journal’s Managing Editor, Will Luers.
PDF
This essay was peer-reviewed. 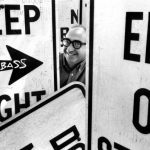 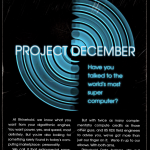 Repetition and Defamiliarization in AI Dungeon and Project December